Piggy, Calypso Orchestra of the Maritimes

Piggy, the calypso orchestra of the Maritimes, formed in Halifax in 1994 with the intent of keeping the spirit of 1920s and '30s calypso alive by performing topical but fun songs. If you come from Trinidad, the sounds won't be the calypso that you were raised on, but should be familiar enough. For the rest of you, it won't matter. You can just enjoy.

Piggy put out three cassettes and one seven-inch vinyl single before Cinnamon Toast Records released the orchestra's only CD, Don't Stop The Calypso, in 1999. The CD included 12 songs from previous releases and 11 new ones. It featured four tracks produced by the band and Ian McGettigan, who you probably know better as a member of Thrush Hermit and the Joel Plaskett Emergency. The emphasis is definitely on the songs, as opposed to slick production, however.

Piggy played a number of benefit concerts for left-wing causes around Halifax and performed its final show on Sun. Dec. 17 at the Marquee club before disbanding. If you ever come across Don't Stop The Calypso while browsing through the bins at your local used CD store, say a silent thank you to the dummy who sold it and reach into your pocket for a few bucks so that you can give it a good home in your collection.
-steve mclean

Don't Stop the Calypso: Songs of Love and Liberation

Calypsos To Please You

Don't Stop the Calypso: Songs of Love and Liberation

Calypsos To Please You 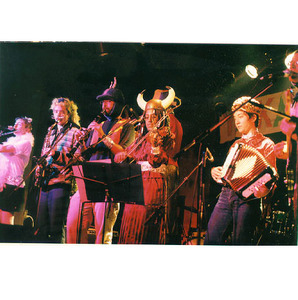 Piggy, Calypso Orchestra of the Maritimes