This e-mail comes to you first in "surprise" and "thanks" for being considered to be on The Museum of Canadian Music site, but I'm not, nor are my former band mates from Canada.

I was born in Minneapolis, MN. then living on a farm near Ellsworth, Wisconsin.

"YUKON" (named after my Alaskan Malamute Dog) was the name of my band, we did play live sometimes to fans that loved to gather 'round especially when we played "Nova Scotia".

The two songs were recorded in our family's living room...live...and then the 1/4 inch tape I sent off to be pressed onto vinyl.
The pic was taken in a field on a hill near our farm.

I'm self taught on the piano, and can't read sheet music, I don't know how to read a note...I play by ear, so I named my record label "No Note".

"Nova Scotia" was written in honor of Anne Murray, who I knew from interviewing her many times as I was (and currently at WDGY) a radio announcer back when I was in my teens.

I never was any good at math, so I wrote "Genius" about a fictitious school kid who is (all that i wasn't)

I've since done more than I ever dreamed I'd do...I was influenced by Elton John mainly at the time.

Since then, I did really get Elton's John's original guitarist (Caleb Quaye) to play on one of my newest recordings...that was sure a dream come true for me.

I welcome anyone to contact me who would like to know more details about the record my e-mail is:
sb@wdgyradio.com
-Scott Bartel 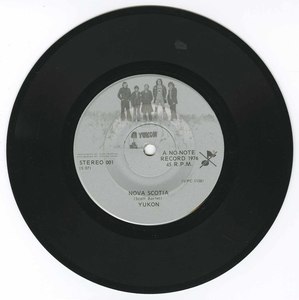