RedRock Hotel was the band that formed out of A Joint Effort right after the show for the FINAL EFFORT album. The name came from rm 310 Bridges House at UNB, it was a nickname for opiated hash.

The band consisted of:

When the Effort broke up, the three of us moved to Toronto at the bidding of Ed Cowan, who owned Thunder Sound Studio. We stayed with Brian's brother and sister-in-law, Peter and Kitty Bourne,until the money ran out (about a month) and we headed to Ottawa to stay with my brother Tim's mother-in-law, Mrs. Haugan, until we got settled in Sandy Hill (Ottawa neighbourhood).

A good friend who got us to record the FINAL EFFORT album, George Johnson (half owner of Little Records in Fredericton) offered to move to Ottawa and manage us. He was responsible for shopping us around to a bunch of labels and got us all kinds of work.

A Joint Effort drummer Grant Harrison moved to Ottawa and played with us a bit. Grant stuck it out for a while and then moved back to New Brunswick. He was replaced by Mario Melanson, who currently resides in Moncton, NB. We then recorded the 45 HITCHIKER'S DREAM (MY SONG) b/w YOUR CONSTANT CHANGE (Brian's song, about me constantly threatening to quit the band) at Daniel Lanois's Grant Avenue Studio in Hamilton. Danny and his brother ran the joint and were very helpful. Danny imparted to us a valuable philosophy about recording: "You can't polish a turd." We also recorded a song of Tim's called I JUST CAN'T WAIT TO GET BACK HOME TO YOU (with Bob Lucier on pedal steel guitar) and another song of mine called CHAMPAGNE JUNCTION. I've got the masters somewhere.

The band went until 1979 when Tim left to devote more time to his marriage. We went on as a four-piece for a while but Brian wanted to move back to the East Coast and the vibe wasn't the same without Tim. We're all still in touch with each other periodically and whenever we run into each other, we all turn into a bunch of goofy 12-year-olds. Gotta love the family, eh?
-Terry Tufts 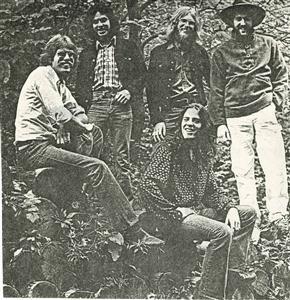