Early new wave rock from several members of the Racicot family, with additions …music bred from the wheat fields of sunny Battleford, Saskatchewan, Canada, and chops earned and learned on the hotel bar circuit in Western Canada.

Corey Hildebrand left Border a while after the record was released, and was replaced by another Saskatchewan boy, Lincoln Foster. With Foster in the line-up, the band later re-branded itself as "Life on Earth" and continued to play the bar circuit in Saskatchewan, Alberta and BC. They stopped touring the late 1980’s after several engagements on the west coast. The band had re-labelled their Border single with the Life on Earth name, and used it as a demo item to promote upcoming engagements.

The colour photos were taken during a photo shoot in Yorkton, Saskatchewan in November, 1984. They were used on posters at local venues.

Leon Racicot is now based in Kamloops, B.C, playing bass in the Henry Small Band, and working in the Multi-media Department at the Thompson Rivers University in Kamloops.

Lyle lives in Regina, SK and Len lives in Vancouver, BC ..neither are any longer involved in music. Their only recording as “Border” was made in Sept. 1981 at Studio West, in Saskatoon, SK.

Corey Hildebrand later played with The Flaming Sambucas, Peak Freeman, and currently "Outside the Wall". He also toured with Jay Semko of the Northern Pikes.
-with notes from Robert Williston and D. Degenstien 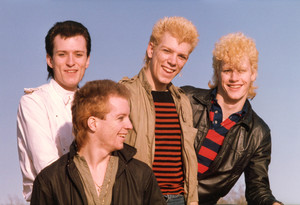 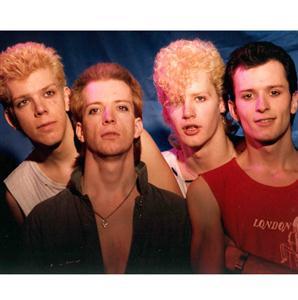