When you've been doing something for 25 years ... you’ve got to love it! And can't help but get good at it!

The Pumps started in Winnipeg Canada in 1979 and it didn't take long for word to spread. Their live shows became legendary for superb musicianship, great energy and a show that was always full surprises. They played to sold-out crowds across Canada garnering a reputation as the anti-posers that could really perform.

The Pumps signed a world wide recording contract with Polygram Records and with the help of British producers Phil Chapman and Jon Astley, delivered some of the freshest sounding recordings of the time. The unmistakable vocals of bassist Chris Burke-Gaffney and drummer Terry Norman Taylor (TNT) singing songs like Success and Bust the TV resonated across the airwaves. Quirky guitarist Lou Petrovich was compared with the greats like Jeff Beck and Jimmy Page and Brent Diamond's arsenal of keyboards created the majestic background. The Pumps live shows became legendary and they continued to win fans while opening for AC/DC, Triumph and Prism.

In 1983 the band changed their name to Orphan and recorded 2 albums for CBS Records at the legendary Power Station Recording Studio in New York. Included on these records were radio favorites “Miracle”, “Lonely At Night” and “Open Up The Skies”. The group toured the country with Platinum Blonde, the Headpins and many more.

In the late nineties the original version of The Pumps reformed to play a benefit show at the Convention Centre in Winnipeg. They were determined to prove that although they were all in there 40s, they could still put on a show worthy of their reputation ... and they did. The fan response was overwhelming. The band realized that there was still a legion of people dying for great rock music. The Pumps decided to continue to play shows and record new songs. Their love for the music had not died. They still perform with unprecedented conviction.

Songs from the The Pumps’ "Gotta Move" and Orphan’s “Lonely At Night” and “Salute” have been re-mastered for “It’s A Miracle” a compilation Of Orphan & The Pumps. The record includes 3 new tracks including “Rock Star” and is available now!

It's A Miracle They're Still Alive

It's A Miracle They're Still Alive 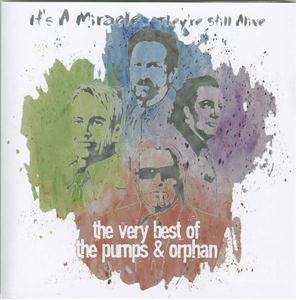