The Hellbound Hepcats are bringing back the sound of the 1950's with an aggressive, big-beat twist-seamlessly fusing elements of Johnny Burnette, Chuck Berry and Brian Setzer with the pure energy of rockabilly. These hardworking rock'n'rollers combine the rawness and passion of the Sun Studio sessions with a harder, faster, more hip-shaking rhythm that is all their own. The Hellbound Hepcats' music reflects the rebellious spirit of early rock n' roll without imitating it. Their originality adds a much-needed new spin to the current rockabilly scene.

The band started out in 2006 as a straight-up rockabilly/country duo, consisting of front man Alexander Brown and standup-bass player Jordan Peddie. Heavily influenced by Montreal's ever-growing rockabilly scene, they soon became masters of their craft-playing in clubs and bars in and around Montreal. In 2007 the addition of drummer Sylvain Lemire rounded out the equation bringing in the pulsing rhythm section that has made the Hepcats the band they are today.

The trio hit the road running, touring relentlessly at venues large and small….everywhere from the Toronto Convention Center to The Cadillac Lounge to just about every watering-hole, tavern and show-bar across Canada. They've shared stages with The Brains, The Creepshow, Gunsmoke, Bloodshot Bill and many others. All in all, The Hellbound Hepcats have played more than 500 gigs in the last 2 years. You name it, The Hellbound Hepcats have played it.

In 2009, The Hellbound Hepcats recorded and produced their first full-length in Montreal. The collection was recorded “off the floor” to capture the original feeling, intensity and rhythm that characterizes authentic rockabilly, as well as to record the spontanaety and musicianship of their live performance. Their self-titled debut album caught the ear of Stomp Records, who immediately signed the band point blank. The Hellbound Hepcats will be hitting the road this summer in support of their self-titled debut including appearances on the Montreal Jazz Fest, Vans Warped Tour, Hotrod Hootenany as well as festival and club shows across the nation.

The 13 track self-titled rockabilly album is a homage to the spirit of rebellion that gave birth to the rock n' roll of the 1950's. The album was recorded at Moonbabe Studio with engineer/producer Tean Schultz. All the songs were written over a a four year span by lead-singer and guitarist Alexander Brown and stand-up bassist Jordan Peddie. From heart-throbbing ballads like “She's The Reason Why” to beat-bopping dance tunes like “Gimme More” and “Brand New Forty-Five”, the sound and themes of the songs are diverse. From the arrogance of “How Many Girls” to the tenderness of “She's The Reason Why”, the album draws inspiration from the never-ending battle between love and lust. 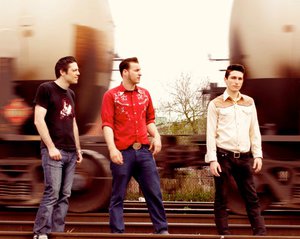 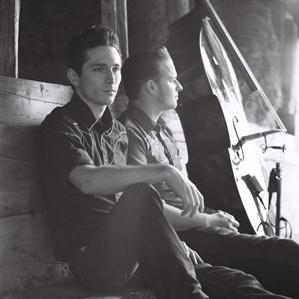