Emergence is a boundary-pushing album with a huge energetic presence whose style lies somewhere between eastern folk and new age. It was initially produced by completely intuitive process, that is to say that Anita and Laird sang and recorded the music together while hearing it for the first time as it emerged from within them. Remarkably they found themselves singing complementary lyrics and vocals in what seems to be a form of Sanskrit - a language that neither them understands. With that track laid down, Mark Waind of Humantown Studios in Guelph then composed and arranged striking instrumentals to augment the songs. But despite this rather onerous process the resulting pieces are highly musical while at the same time very evocative and at times even entrancing. Listeners have written to us to say that they use the music for meditation healing journeys or simply to relax. The effect is not necessarily esoteric at all - one woman wrote to say 'Emergence' inspires her on the treadmill. 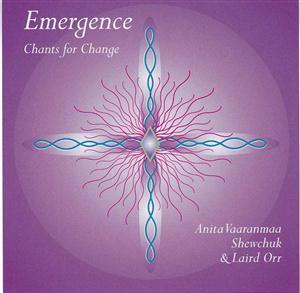