Born on the praries of Manitoba, Shingoose (born Curtis Jonnie) is an influential musician and producer. Shingoose toured and performed with several groups and festivals throughout much of the 1960's and 1970's. In 1969 Curtis Jonnie signed to ABC Records in Washington D.C where he was produced by Eddie Kramer. Through Kramer, Jonnie met many other influential artists of the time such as John Lennon, Jimi Hendrix and others. Later establishing himself as a producer, in 1986 Jonnie received acclaim for his production of the series Indian Time, airing on CTV, Global, Bravo and PBS which highlighted performances by Tom Jackson, Buffy Sainte-Marie, Laura Vinson, and other native performers.

Raised by a Mennonite family, Jonnie is Ojibwe having grown up on the Rosseau River Reserve. Jonnies return to Winnipeg in 1973 from previous years in the USA is when he became more actively involved as an activist of Native issues in North America. In 2012 he was inducted into the Manitoba Music Hall of Fame.

Under the name Shingoose, Aboriginal folk artist Curtis Jonnie played to audiences in the 1960’s and 1970’s in North America. In 2012 Jonnie was inducted into the Manitoba Music Hall of Fame for his influence as musician, activist and producer. In 2015 Seattles’ Light In The Attic Records re-released Jonnies track Silver River as part of the compilation 3-LP set Native North America (Vol. 1): Aboriginal Folk, Rock & Country, 1966 – 1985.

Curtis Jonnie has received several notable awards, including being inducted in the Manitoba Music Hall of Fame in 2012.

[Jonnie] has been at the forefront of Aboriginal music through the late '60s to the early '90s," says David McLeod, CEO of NCI FM.

"He's released three albums, recorded with Bruce Cockburn, established an Aboriginal category at the Junos and produced television programs, which featured native talent. He is well deserving to be inducted." 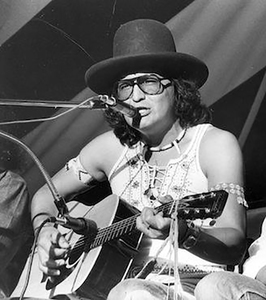