Singer and bandleader Skip Pollard moved to Calgary in 1971 and formed the Biggy Twiggy Band to tour between Thunder Bay and Vancouver. This undiscovered gem, the band’s lone seven-inch, was recorded at an old re-furbished church in Calgary for Peter Bentley’s Calgary-based Westmount label, known more for country music than for stellar funk/soul dancefloor monsters like this. ‘Mama Won't Let You’ has a nice seventies funk sound with great falsetto vocals. A real dancer! The flip, ‘I Don't Want That to Change’, is a smooth upbeat seventies soul ballad with an amazing horn section and vocals.

Though both sides are credited to Pollard alone, guitarist Lou DeAdder, a native of Whitby, Ontario recalls, "I wrote the chord structure/arrangement for the b side 'I Don't Want That to Change'. Leo Sullivan wrote all the horn section stuff for both tunes - Skip Pollard wrote the words and melody for the b side. The a side was written by an American artist. The single made it onto the charts in Calgary and Edmonton - somewhere around the 30 mark.

Lou goes on to say: “The players in the Biggy Twiggy Band were mostly from Toronto. Back around 1973 the band came back to Toronto to find new players for the band. My first gig with them was in Thunder Bay - Nick and I drove the band van - it is over 900 miles from Toronto to Thunder Bay. Those were the good old days - always playing 6 nights a week and traveling to the next job on Sunday. Back then it was primarily American bands that dominated the full time circuit (out west anyway) with a few of us Canadian acts here and there. One point of interest was when we played in Edmonton - it was called the Fire Hall and was actually an old church renovated into a bar. There were always celebrities in the crowd - one night Gordon Lightfoot was sitting right in front of me - he was huge back in the 70's. The guy he was with came backstage after our first set and said "Mister Lightfoot would like to get up and play drums with you" - Skip said something like "in an R&B band - no way." My line is that I would have let him get up and play spoons with us if he wanted to. I worked with Shirley Eikhard a year or so after that and her keyboard player, Mike Hefernan, has been with Lightfoot since the 80's I believe”.

The single was recorded in February, 1975.

His music is available on this site here: http://www.mocm.ca/Music/Artist.aspx?ArtistId=106221 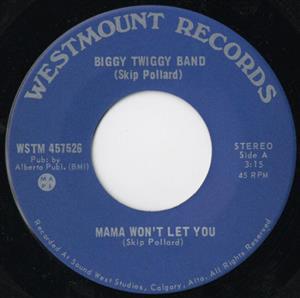