Atlantic Canadian musician who has been performing since 1966, recorded "Love Potion No.9" and he is still recording with his band Backslider on the East Coast of Canada.

Beginning his musical career in Saint John N.B. Canada in 1965 after hearing the Beatles has been a life long adventure for Art. Born in Newcastle N.B. father and grandfather both musicians {part time} music was always part of his life.There was always a piano in the house and music on the hifi or radio.His first guitar was a gift from his grandmother and so it started. He met up with some friends in the area who had a band called "The Misfits" and started to learn enough songs to play in a local band called The Rising Sons and Saturdays Children, members of the groups included Ron Watters, Barry Yonkers, Leo Frigault.

The group had some name changes to The Heads Of Sound then to Polyannas Dreamworld. Members in these band changes included Dwight Hare, Debbie Martin, Pat O'Kane, Ron Morrison, Mike Jardine,P aul Lifsches, Don Ayer,Richard[Beep]Parks, Carter Dickson, George Morrison, Lloyd Doyle. These groups performed on the Miramichi from 1968-71. They also performed around the province at high schools and arenas and in battle of the bands. Art and Pat wrote original music in those days and even Mike Lifsches and Art wrote a song called "On My Way".

Art and Pat entered a song into the CBC song contest called "This Time". The group eventually split up with members going their own way but Art joined the group Hard Road as the bass player. The members of this group were Mike Lifsches (drums), Roland Buckley (guitar) and Gary Hare (keyboards). Mike left the group and was replaced with Frank MacDonald on drums. This group went on the road touring N.B., Quebec and all over. Various member changes in this group included Jacques Levessure (drums), Roger Brideau (drums), Bill Coughlan (drums) and John Nantel (drums).

In 1976 this group with Art Murphy/bass/vocals/keyboard,Roland Buckley/lead guitar/vocals,Roger Brideau/drums recorded LOVE POTION NO.9/NOT HERE WITH ME on Interpro Records,produced by Rolly Corkum.They appeared in Rock Scene magazine from New York USA , Jive Times magazine from Toronto,BMI Canada magazine and numerous newspapers across the country.They appeared on radio shows
in Canada and in the USA.During 1975 Art did some gigs with a separate band around N.B. and Nova Scotia whose members included: Don Bosse/vocals,Guy Parent/guitar,Dave Essey/drums,Michelle Clark/ drums, then went back on the road with HARD ROAD.After years of travel and performing, living in Calgary Alberta and Vancouver B.C.and La Malbaie Que. Art went back to Newcastle.N.B. He performed a solo act in 1979 and his next group in 1991/97 was called LOOKOUT. The original group included Tony Cando (bass), Rick Halas (bass), Karl Fitzgerald Sloman (drums). Other members included Daniel Pineau (drums), Cory Matchett (drums), Kurt Dugauy (drums), Johnny Aubie (keyboards).

The group Backslider appeared on ASN/ATVs show Breakfast Television as well as Rogers Cable and numerous radio shows on CBC and local radio programs. They have appeared at clubs, arenas and special events and were called the hardest working band on the Miramichi. Art has been a member of SOCAN since 1976. All art work and CD designs and photos are done by James Bond from Jims Digital in Miramichi N.B. Some of the bands Art did short stints with over the years were: The Rythmn Method (1972) with members Aubrey Corbin, Lowell McLellan, Mike Lifsches; Rust; Mien De Rien (Quebec) and COD whose members included Carter Dickson, Ollie Dickson and Daryll Dunn.

From 1980 till 1991 Art worked at Miramichi Cable TV as the Program Coordinator and at Fundy Cable as Program Director. Art also had a tv show called NIGHT ROCK a record request show from 1980-1990 on Fundy Cable10 airing local singers as well as all the hits from the 1950's till 1990 on vinyl as well as interviewing bands and singers travelling through the area such as Bobby Curtola,The Platters, Jamie Warren, Joan Kennedy, Box Car Willy, Anita Perras, Tim Taylor, Debbie Myers, Gene MacLellan, Ronnie Sommers, and also VJ's from Much Music such as J.D.Roberts in the 1980's and the list goes on.

In the 1980's Art made a video with one of the songs he wrote called "Tracy". Art performed at the Miramichi Folk Song festival as a solo performer in the early 1990's and in 2000/2001 with band Backslider, always singing original songs. Art has written more then 50 new songs which over the next few years hopefully will be on CD. 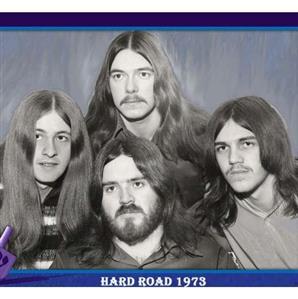