The Zambonis: Rocking The Rink

(Since the Nordiques were a team)

1991
•The Zambonis form in 1991 when defenseman/guitarist/singer Dave Schneider asks brothers Tarquin and Peter Katis if they want to start a group that played nothing but songs about hockey.

1993
•After writing new songs especially “The Referee’s Daughter,” the band realizes hockey songs can be about hockey, life, love and hockey. Not just hockey.

1994
•Release first 7-inch single features “Away Game” and rips off logos from The New York Rangers and The NHL. (We would learn our lesson eventually.)

1996
•Debut CD 100% Hockey…and other stuff cracks the Top 25 on both the CMJ and Gavin charts, spends 13 weeks on the CMJ Top 200 and works its way onto NHL, NCAA and minor league hockey arena playlists nationwide.
•Single “Avalanche!” becomes a good-luck anthem for the Colorado Avalanche’s Stanley Cup playoff run.

The Zamboni® Company and The Zambonis leave the lawyers in the office and meet in person. What was initially a cease and desist / year long off ice battle, was simply resolved with a hand written letter asking The Company to please not make us change our names to “The Motorized Ice Resurfacing Machines”. The two workout a licensing agreement.

1999
•Viacom produces a video for Zambonis song “Hockey Monkey”. It makes its debut on the popular Nickelodeon program Kablam!
•Second full-length CD, More Songs About Hockey…and buildings and food takes the ice, leading to a feature story in The New York Times and a “Random Notes” photo in Rolling Stone.
•Maxim awards us “Best Band You Never Heard Of,” topping the Go-Betweens and At The Drive-In.

2002
•A career moment, The Zambonis perform at the 2002 NHL All-Star Game at The Staples Center in Los Angeles—alongside such acts as Jewel and Five For Fighting.
•Four Zambonis songs appear on the video game NHL Hitz 2003, along with tracks by Rob Zombie, Moby and Incubus.

2003
•Entertainment Weekly names The Zambonis one of the “Must-Haves For The Holidays.” They exclaim: “Finally: a hockey-themed band we can all love!”

2004
•The Wall Street Journal features us in a front-page story about the growing sports-rock connection.
•ESPN’s SportsCenter features us in a special report investigating the relationship between athletes and musicians.
•During the NHL lockout, we perform in Riga, Latvia (you read that correctly), performing on a national television program, a popular radio station, a shopping mall—and a punk club (with the odd name of “Saxophones”)

2006
•The Zambonis sign a Canada-only deal with Nettwerk Records, who release The Zambonis Greatest Hits.
•“Hockey Monkey” becomes the theme of the FOX Television sitcom The Loop, a sleeper comedy show that ran for two years.

2008
•The NHL Network’s national television campaign features our song, “Boom Boom Boom.”
•Not to be outdone, Versus (now NBC Sports) features our songs in highlight packages.
•We make our third appearance at the NCAA Division III Hockey Championships in Lake Placid, NY
•We release a split 7-inch single with fellow theme-band stars, Harry and the Potters;
•The Zambonis win “Best Band” in the Fairfield Weekly (CT) Reader’s Poll—for the seventh consecutive year.
•The NHL invites The Zambonis to headline the 2008 NHL Face-Off event on NYC’s 46th Street. Band leader Dave Schneider doubles as MC, interviewing NHL legends as Dave “The Hammer” Schultz, Terry O’Reilly and many others.
•The band appears on NHL Live (Sirius/XM Radio) and on the NHL Network.

2009
•We’re mentioned in a front-page story in The New York Times, about The Zamboni ice-resurfacing machine and its cultural impact.

2010
•The Zambonis appear in a pair of stories in Sports Illustrated and ESPN.com.
•Dave Schneider appears in the documentary, Last Days of the Coliseum, a historical look at the rise and (literal) fall of the New Haven Coliseum. A pair of Zambonis songs are also featured in the soundtrack.

2011
•Sharing a bill with Three Doors Down, The Zambonis appear before thousands of hockey fans at the 2011 NHL All-Star Game in Raleigh, North Carolina.
•Popular Yahoo Hockey Blog Puck Daddy features The Zambonis.

2012
•Release new record titled Five Minute Major (In D Minor) to rave reviews.
• 2 videos produced for songs “I’m A Puck” and “Goalie”.
•Documentary “We Are The Zambonis” in the works.
•You read this.

To Bleed Black and Gold

More Songs About Hockey and Buildings and Food

To Bleed Black and Gold

ST (split with Harry and the Potters) 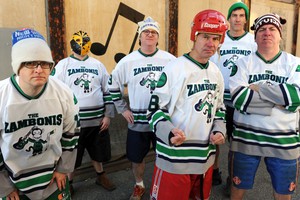 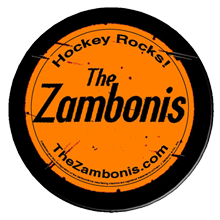