The Wayouts were formed by Gerry “Johnny Bubblegum” Smith in 1979 after the break-up of Tyranna.

Conceptually, Gerry wanted to create high-energy, light-hearted band in response to the anger and violence of the punk scene he had encountered at The Turning Point – most notably, after a Tyranna / Forgotten Rebels gig at which a Viletones entourage trashed the club and beat an audience member unconscious with boots and chairs. As New Wave music morphed into electrobeat and dark bands like Joy Division began to proliferate, WO’s adamantly continued in their “bubblegum-punk” style.

Mike and Gerry looked very similar, and co-incidentally, when Gerry had opened for Iggy Pop at The Danforth Music Hall, one of Mike’s friends commented on this, to which Mike replied “Maybe we’ll start a band someday.”

Mike and Gerry began writing songs and looking for a drummer and singer, rehearsing for awhile with singer Ruby T’s, ex-Curse and True Confessions.

A young Ian Blurton auditioned as a drummer, but Gerry declined him as he was only 15.

After several months of searching with no luck, Gerry and Mike were about to give up on the band when Gerry’s friend Doug Begoray suggested the band release a record anyway, and offered to front the costs.

Recording was done at Hamilton’s Basement Studio, (with extra vocal recordings done at Cottingham Sound) where Tyranna and Forgotten Rebels had recorded demos. Cleave Anderson, ex-Battered Wives and Tyranna – now with The Sharks, was enlisted on drums.

The record was pressed at World Records and distributed locally by the band. Sales were not impressive.

CHUM-FM disc jockey Ingrid Schumacher aired “Red Rover” once, and was told by her boss “Do that again and you’re fired.”

CFNY-FM aired The Wayouts on a Battle Of The bands style play-off, against Mama Qia 2( pre-Parachute Club), who got more than twice as many votes, and went on to win the contest. The WO’s were playing their first gig that night, so no one was home to man the phones.

Eventually, drummer Warren Young, joined the band, and Mike and Gerry just decided to sing themselves, as a frontman, had not been found. The earliest gigs saw the band wearing matching black Page Boy jackets, ala 60’s pop band uniforms. This aesthetic choice morphed into the band appearing in elaborate opera costumes, native Indian headdresses, etc – borrowed by Gerry from his job at the Malabar Costume shop. Posters for the band also sported a 60’s aesthetic, often employing images of 60’s media stars or comic book themes.

At this time The Wayouts were mainly gigging at Larry’s Headspace (formerly Larry’s Hideaway) and The Edge.

The later period WO’s showed more influence of Garage and Psychedelic rock sounds. The band was then playing primarily at The Beverley Tavern, which was rather like the bands rec room. These gigs saw a total demolition of the audience/stage barrier with open rapport going back and forth. Friends often joined the band to sing a song, or play the bass while Gerry danced with the audience. Mike’s lead guitar was very strong and songs like “Breakout” were basically long lead guitar solos with verses and choruses between.

“Red Rover” was covered in the early 90’s by Naugahyde Five, which also featured Gerry on bass.

A late period live favorite “Ophelia Watersport” was recorded by Gerry on his 2008 CD ‘Will The Circle’ which also featured drummer Cleave Anderson.

Tht Band Played a few reunion gigs throughout the 90's, with various drummers, and most recently Teamed up with Cleave Anderson, the original drummer from their single, and played the Horseshoe Tavern in toronto, in August 2008. The following day they played a live radio broadcast on CIUT. The recording of that broadcast is here for all to listen to. 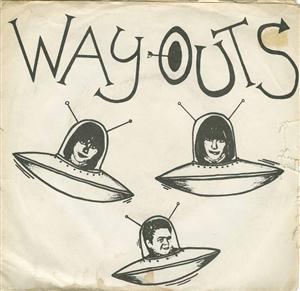