Don't be fooled by their charming exteriors, these four lovely ladies will knock you out with biting riffs and wits to match! Once described as "Elvis Costello meets the Shangri-Las", Vancougar unleashes a wall of sound and smiles to peel your ass off of your seat. Guitar solos! Reverb! Keys!Tremolo! Sweet sweet harmony! Footloose and fancy free! Squares beware, Vancougar will chew you up and spit you out! "The four members [of Vancougar], all young women, played a set of terrific songs that borrowed from girl groups ranging from the Shirelles to the Go-Go's. Lead vocalist and guitarist Eden, who also writes the majority of the material, has a talent for penning rave-up tunes with a serious melodic bite and some major hooks, and keyboardist Megan added to the party flavour with her bouncy riffs. But it was bassist Becca, I believe, who had the night's best line. The musicians were discussing how to play an upcoming song when she realized out loud: "Hey! I know a key!" - The Georgia Straight (Vancouver, BC) "Vancougar played the Morrissey on Saturday night, and, perhaps because I'm getting to be a bit of a Van Cougar myself, I quite enjoyed it. The group strike a confident midpoint between Weezer and the Breeders, with spiky choruses and a penchant for soaring guitar solos. Being a group of four women, Vancougar are sure to invite neat little paeans to their adorability, but it's impossible to overlook their knack for a clean hook."
-The Westender 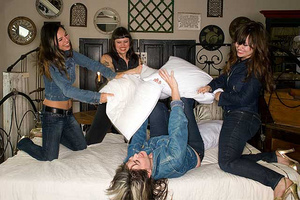 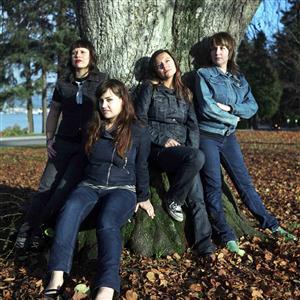