Jerry (b Jaroslav) Toth. Saxophonist, clarinetist, flutist, arranger, composer, producer, b Windsor, Ont, 15 Nov 1928, d Toronto 31 Mar 1999. His teachers in Toronto were Frank Hiron (saxophone) and Herbert Pye (clarinet, at the TCM). In 1953 he studied woodwinds in Los Angeles with Dale Eisenhuth. Toth played alto saxophone 1945-53 in the dance bands of Stan Patton, Bobby Gimby, Trump Davidson, and others and was co-leader 1952-7 with the trombonist Ross Culley and the saxophonist Roy Smith of a 17-piece jazz band. He was a member of Phil Nimmons' jazz bands 1956-74 and also studied orchestration with Nimmons.

Toth began playing in CBC orchestras in 1954 under Jack Kane and in later years was a leading Toronto studio musician. He was chief arranger or music director for the CBC's 'Parade' ca 1957-60 and in the mid-1960s began writing and producing jingles with his brother Rudy and others. He produced recordings by several singers, served as audio consultant for many TV productions and during the building of Roy Thomson Hall, and composed and arranged music for CTL LPs by Bobby Edwards' Fat City Guitars (which recorded his Fat City Suite in E Major, CTL 477-5162) and the trombonist Ted Roderman. Toth was known in particular for his orchestration of the theme for Hockey Night in Canadaand Ontario's official theme for the Canadian centennial, 'A Place to Stand.' He also contributed music for Rich Little's Emmy-winning TV show A Christmas Carol.

Toth's own discography includes the LPs The Music of Jerry (1969, CTL 477-5116), The Twelve Sides of Jerry Toth (1973, CTL 477-5171), and The Classic Jerry Toth (1976, CTLS-5201/United UALA-666G) by his orchestra, and Moment of Love (1972, Warner WSC 9008), by his singers, both essentially studio groups. The song 'Moment of Love,' written by Rudy Toth, and recorded with him as piano soloist, was popular in Canada. It, along with Hagood Hardy's 'Homecoming,' became the object of the first music plagiarism legal case in Canada, Gondos v. Hardy and Toth. The unsuccessful suit, which alleged copyright infringement, was dismissed with costs in July 1982, vindicating the Toth brothers.

Jerry Toth also recorded as a soloist with Phil Nimmons' bands and while a member 1970-90 of the Boss Brass. The latter often featured his alto saxophone in ballad settings - eg, 'Autumn in New York' on the album Atras da Porta. Toth also led his own jazz quartet on occasion in Toronto clubs.

The Fool on the Hill

Contours (re-issue of "The Twelve Sides of Jerry Toth) 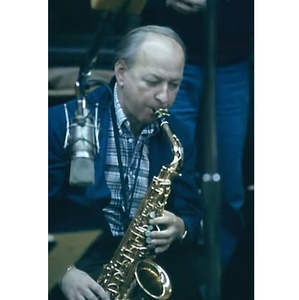