Terry & The Pyrates were another hot R&B band with roots at The Modern Age Lounge, in east end Toronto. The group started out as a quintet called The Dana, featuring lead vocalist Glen Daigle, guitarist Val Rufo, organist Aldur Kundur, bass player Mike Levine and drummer Lance Wright. When Glen Daigle left for college, he was replaced by the more experienced vocal powerhouse Terry Walker, who had worked as MC and back-up singer for The Associates. In a surprising move, the group added a second drummer and a horn section and changed their name to Terry & The Pyrates. They immediately signed a recording contract with Trend Records and released an up-tempo dance single called, not surprisingly, “Keep On Dancin”. They eventually morphed into the 9-piece Aurora Borealis, securing a major-label record deal in the U.S. But they were unable to gain the success they were hoping for. Mike Levine later left to become a founding member of Triumph. 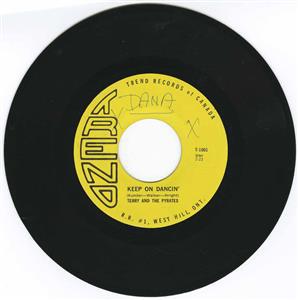