A new name - young, exciting and very talented Lisa Taan does Simon Simon. Top 40 geared, we're sure this will move to a spot on the charts. This girl has everything going for her - good song - exciting arrangements and plenty of talent. The flip is 'No-one 'cep' Me - a swinger.

One of the newest recording artists on the Montreal scene is a pretty young gal named Liza Taan. From out of the folk-rock bag she's picked a couple of groovy songs written and produced by Martin Martin, who's no stranger to the Canadian music scene himself. Liza's disc is tagged "Simon, Simon" and "No One 'Cept Me" (RCA 57 -3422). Liza did a lot of singing in the Toronto and New York Villages before they turned folk, rock. She now spends most of her time in Montreal. Not to be left behind the times. Liza is now rehearsing with a backing group which she has just formed.

For the next couple of months Liza plans to stay in the Montreal area, playing such places as the New Penelope, The De Milo Room, and the Cafe Andre. In May, the singer and her group plan to invade the New York Village, where dates are now being arranged.
-Mel McCormack, RPM April 29, 1967

Both tracks written by Montreal producer Martin Martin (Martin Hillman). Re-issued with picture sleeve in Belgium in 1969. This was her only record release.

Simon, Simon b/w No One Cept Me (picture sleeve re-issue) 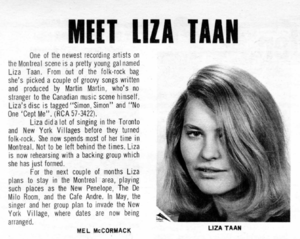 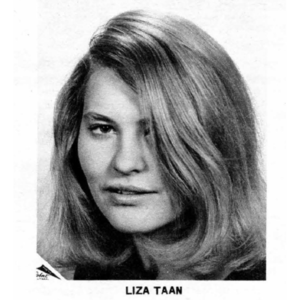