Patty Surbey was a remarkable Canadian rocker of the mid '60s who released two awesome singles and then dropped out of music.

Those two singles, "(I Want) A Beatle for Christmas" (1964) and "Hey, Boy" (1965) weren't hits, but both are excellent cuts that feature Surbey's distinctive yelp, which sounds kind of like a female version of Freddy "Boom Boom" Cannon. For sheer verve, "Hey, Boy" could be put in a category with the Tammys' "Egyptian Shumba" and the recordings of teen drama queen Cathy Carroll.

"(I Want) A Beatle for Christmas" could have become a hit, but a shipping delay prevented the single from being available until early December of 1964. The song was listed as a "pick hit" on the Dec. 12 survey at CFUN-AM in Vancouver but didn't actually chart.

Surbey was from Burnaby, British Columbia, and appeared as a vocalist on Vancouver's Let's Go television show, which was similar to Your Hit Parade in that it featured regular vocalists performing hits of the day.

Vancouver's Aragon Records signed Surbey and paired her with a Vancouver band called the Canadian V.I.P.'s. In keeping with their name, the Canadian V.I.P.'s would wear tuxedos and ride to their shows in limousines. The original four members were Dave Trainor (guitar), Louis Pitre (piano, later a member of the Centaurs), Norm Hanson (bass), and Pat Trainor (drums). Before they backed Surbey, they recorded a single for Aragon that contained a vocal version of Little Richard's "Lucille" and an instrumental, "Monsoon."

Surbey's first single, "(I Want) A Beatle for Christmas," is one of the few Beatles-related novelty records that is worth listening to. Several records with this title were released around this time, but Surbey's is a different song. Released as Aragon #402, it featured another Christmas tune on the flip side. That song, "Christmas All Year 'Round," is a mid-tempo number that says we can make Christmas come every day by being nice. Aragon allegedly leased the master to Los Angeles' World Pacific Records for release in the United States, but I haven't found any evidence of a World Pacific pressing.

Her next single, "Hey, Boy!," backed with "Everyone I Know," was released by London, Ontario's Sparton Records, which had released Paul Anka's records in Canada in the '50s. For a regional record that never saw any chart action, "Hey, Boy!" has been anthologized a lot. And for good reason: It's great. The teen boy's final words are a bit puzzling, but Surbey's vocal performance is delightful. "Everyone I Know" is a slower song punctuated with somewhat intrusive dialog and laughter.

In 1966, Surbey performed Petula Clark's "A Sign of the Times" (a Top 10 hit in Canada) on The Ken Colman Show on CBC. A video of her performance can be seen here. She sings it straight without her characteristic yelps, but a bit of her unruly personality shows through when she sticks out her tongue (at 0:34).

After leaving Let's Go, Surbey became a born-again Christian, moved to Ontario, and retired from the music business. If she had continued to make records, and if she hadn't had to compete with the British Invasion, and if her singles had gotten more exposure, she might have become a major star. Her brash vocals and signature yelp made her one of the most distinctive female teen singers of her time and place.

You can find all four of Surbey's songs as well as the two sides by the Canadian V.I.P.'s on Bear Family Records' 2003 compilation Real Gone Aragon: Roots, Rockers & Rockabillies. Some of the details about Surbey in this Music Weird blog post are adapted from Wayne Russell's liner notes.

Hey Boy! b/w Everyone I Know 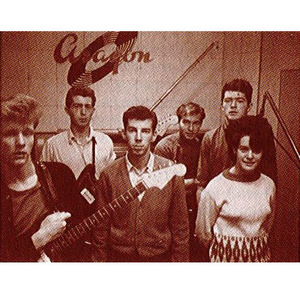