A Toronto, Ontario-based group, though only Laurie Hood, who graduated from the University of Toronto Faculty Of Music seems to have grown up there. Victor Garber was an actor, who'd been born in London, Ontario, prior to moving to Toronto, where he'd been a member of the University of Toronto's Hart House acting group. He'd performed in various Toronto workshop productions before joining The Sugar Shoppe. Lee Harris had undergone some vocal training. Peter Mann grew up in Miami and later worked as an arranger/producer in New York. Shortly after joining the band he wrote his arrangement of Bobby Gimby's Canada, which climbed to No. 40 on 26nd August 1967 and proved to be the biggest hit. The follow-up, The Attitude, reflected the prevailing psychedelia of the era and brought them a measure of further chart success.

If I Were A Carpenter also figured on Yorkville's CTV's After Four compilation in 1968 and The Attitude was included on Yorkville Evolution the same year.
-Dreams, Fantasies, Nightmares

The Sugar Shoppe was a Canadian sunshine pop vocal group who recorded in the late 1960s and featured actor Victor Garber.

The group was formed in Toronto by lead singer, songwriter and pianist Peter Mann. Born in New York City, he grew up in Miami, Florida, before working as an arranger and relocating to Canada in 1965. There, he met University of Toronto School of Music student and singer Laurie Hood, and singers Lee Harris and Victor Garber, an actor and singer who was also studying in Toronto as well as singing in the city's clubs.

With two male singers (Mann and Garber) and two female (Hood and Harris), they modeled themselves on the Mamas & the Papas and began working in the studio on a project to mark the Canadian Centennial in 1967. The group's first single was Mann's arrangement of Bobby Gimby's song "Canada"; released on the Yorkville label, it reached no.40 on the RPM Canadian singles chart. The follow-up, "The Attitude", was less successful, reaching no.77. However, the group won a recording deal with Capitol Records in Los Angeles, and recorded an album, The Sugar Shoppe, released in 1968. It was produced by Al De Lory and arranged by Mort Garson, with session musicians including "The Wrecking Crew" of Hal Blaine, Carol Kaye, Larry Knechtel, Earl Palmer, Mike Deasy, and Plas Johnson. Tracks included versions of Donovan's "Skip-a-Long Sam", which was also released as a single, reaching no. 73 on the Canadian chart; Bobbie Gentry's "Papa, Won’t You Let Me Go to Town"; Mike Leander's theme song for the movie Privilege (#93); and a re-recorded version of "The Attitude". However, despite appearances on both Ed Sullivan's and Johnny Carson's TV shows, the group's commercial success was limited.

The Sugar Shoppe then joined Epic Records, and in 1969 released a version of Laura Nyro's "Save the Country", and performed it on the Ed Sullivan Show July 6, 1969, which used an arrangement later borrowed by the 5th Dimension. However, it was not a commercial success. The group continued to perform, mainly in Canada, before Mann and Harris left in 1970. Garber and Hood then formed The Shoppe with Sandy Crawley. They recorded the soundtrack for a TV series based on Greek mythology in 1971, and recorded several tracks issued on anthologies. By 1973, the group had finally disbanded.

Garber became a leading film, stage and television actor. Mann remained active in recording sessions in Canada, and later worked mainly in television. Mann passed away at home in Toronto, Ontario December 7, 2021 at the age of 80. Hood and Harris later worked as session singers and were both part of another group, Shooter, Myles and Lenny, in the 1970s. Hood was the female singer in Klaatu's "California Jam". Harris developed multiple sclerosis, leading to her death in the 1990s. Lee Harris was the sister of Peter Harris, head of the guitar program at Humber College in Toronto, Ontario, for 22 years until September, 1994, when he discovered he had cancer. He died of cancer January 13, 1995, at the age of 49.

The Sugar Shoppe was reissued on CD with bonus tracks by Now Sounds/Cherry Red Records in April 2013.

The Sugar Shoppe came together in Toronto as a studio project in 1967. Peter Mann had relocated from New York and met up with Laurie Hood, who was in her last year of a scholarship at the University Of Toronto's Faculty of Music.

They also teamed up with Lee Harris (who had three years of vocal training), and London, Ontario native Victor Garber who was acting in the University Of Toronto's Hart House and moonlighting in coffeehouses around Toronto.

At the time of the band's inception Mann had re-arranged Bobby Gimby's anthemic song "Canada" which the band released as its first single in 1967 on Yorkville Records. They had one more single in 1967, "The Attitude", before being signed to Capitol Records for a full-length self-titled album in 1968.

Laurie Hood would go on to take an office job with Toronto Sound Studio working for Terry Brown and Doug Riley. She eventually became a well-respected session singer for the likes of Klaatu (1974's 'California Jam'), Shooter, Myles And Lenny (along with Sugar Shoppe bandmate Lee Harris), and eventually for such luminaries as Anne Murray in the '80's; Victor Garber would find fame as a stage and screen actor starring in the hugely successful Hollywood blockbuster 'Titanic' and in the television series 'Alias'.

The Attitude b/w If I Were a Carpenter

Save the Country b/w Easy to be Hard

The Attitude b/w If I Were a Carpenter

Save the Country b/w Easy to be Hard 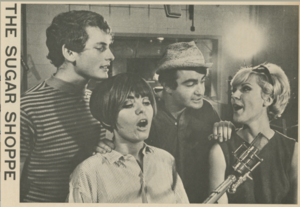 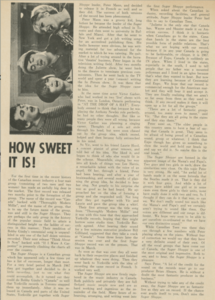 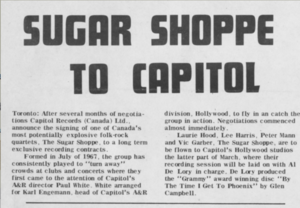 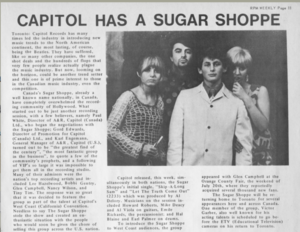 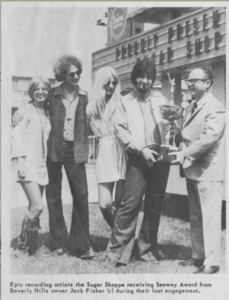 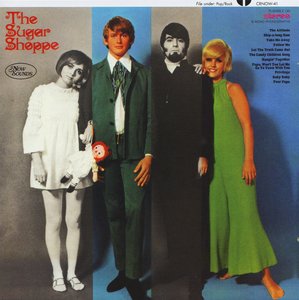