Jack Millman, had a hand in many interesting, obscure and highly collectible records from the 1960s and 1970s. We just released the Afrodesia album, recorded by the Afro Soultet, produced and released by Milman on his Banyan label. More on this, plus Russian models, Tina Turner country albums, and the invention of the video jukebox after the jump below…

After seeing them play at the Living Room (which later became the Comedy Store) on Sunset Boulevard, Millman became manager of the Afro Latin Blues Quintet +1, and signed them to Randy Woods (creator/owner of the Mira, Mirwood, Crestview, Surrey labels) in the late 1960s.Having released several albums this band would later become the Afro Soultet. The liner notes to their Afrodesia album state “This is Afrodesia! A Musical collage of many peoples…it comes from Africa and from Arabia, from the South Seas and from Asia.” Living up to the promise of those notes Afrodesia mixes Latin Jazz, with straight jazz, worldly percussion, surf, rock, funk, oddball sound effects, a touch of lounge, and some hints of tropicalia. Millman produced and released the Afrodesia album on his own Banyon label sometime between 1968 – 1971 (no release date is listed on the record, and Millman cannot recall a more exact date.)

Somewhere between 500 and 1000 LPs were pressed on Banyon. The album was licensed non-exclusively to Betty Chiappetta (of Vee-Jay fame) for a period of time, but it is possible that the record only saw release as a test pressing during the license, and that no official release was made commercially available. After their short stint as the Afro Soultet, the band morphed one more time into The Afro Latin Soultet releasing records with pianist Phil Moore III at the helm.

Jack Maurice Millman has been composing and orchestrating music since 1948. His early musical career was as a professional jazz trumpeter. He studied trumpet with Rafael Mendez and Shorty Rogers, composition, orchestration and arranging with Alexander Laslo and Eric Zeisl.

At the age of 17 he sat-in with Lionel Hampton at the Meadowbrook Ballroom and was subsequently asked to join the band for a 6-week stint at the Paramount Theatre in Los Angeles. Shortly after, he was drafted into the Army. He performed with the 6th Army Band at the Presidio in San Francisco and joined the Stan Kenton Orchestra for a West Coast tour.

When he completed his service he formed and managed his own jazz groups throughout the 1950s and even joined Prez Prado’s Band for a brief road tour in 1955. During this time he also composed a series of jazz charts which gained popularity with local Southern California musicians. Upon his return to Hollywood he recorded four albums on major labels with his own All-Star personnel performing many of his own compositions alongside popular standards. He then formed an 18-piece big band that performed at the Rendezvous Ballroom in Balboa where he was actively involved in the surf/rock craze. Dick Dale, Jan & Dean, The Beach Boys, as well as many other surf/rock groups played at the Rendezvous under the Millman baton.

Millman stopped playing in 1962, he moved to Big Sur for 2 years “to be a hermit.” 15 years of playing and touring had taken a toll, and he wanted to isolate himself for a while. Having sufficiently recharged he opened up business as Music Industries on La Cahuenga in Hollywood in 1964. He made himself busy by collecting music rights to represent as a publisher, agent, and manager.

“I knew music so well, fascinated by all the diff genres and had connections to both the musicians, the agents, and the business people,” he says.

It was during this time that Jack Millman also became known as Johnny Kitchen, thanks to Billy Elder (a fellow musician who worked with Jack at the time.) “It was a joke, we were wise cracking and that’s the name he gave me. It didn’t mean anything, but the name stuck and I went city hall and registered it as a fictitious business name, and I used it to register with ASCAP, too.”

Through Millmans attorney, the high-powered Abe Sommer (attorney to The Doors amongst others), he met Randy Wood (the previous owner of the Vee Jay label) who asked Millman for a budget line of records. Millman obliged by piecing together 36 albums, over the period of about 8-10 years, and on Woods four labels.

Millman placed advertisements in music magazines in the USA (Cashbox, Billboard, Variety, etc) and abroad, offering his music library, legal rights, and a variety of music uses. He landed a ton of advertising work making jingles. And he would wind-up recording many records, for many people, for multiple reasons.

One such label was Condor, based in British Columbia for whom Millman supplied a large amount of music. “They wanted to inflate the value of their business because they were going public,” explains Millman. “I think they were in the lumber business. Gene Daniels (my contact) said he was told I had a library, and could sell him product.”

Millman sold them a diversified collection of tunes,from rock n’ roll, to surf, rnb, etc eventually making enough for 15 albums. He recalls coming up with the name for the label having looked at a calendar on his wall which featured pictures of birds. “That must have been Condor month,” he jokes. And Millmans (ex-)wife Ludmila, appears on several of the Condor album covers. She was a Russian-born model/actress. Daniels saw her head shots at Millmans place and she wound up gracing several LPs. Millman often had a connection to the artwork of the music he was creating and providing. “I did a lot of graphics for Randy Woods. I’m an ideas man, I like to do the graphics sometimes - if it helps sell the product and turns the guy on.”

Millman also had a hand in multiple tax shelter records. A change in tax laws of the day meant that high income owners could open up a new business to write-off a lot of their taxes. Record labels became a part of that reality with people buying master recordings to defer their taxes.

“They only had to release the promo copies, somewhere between 500 – 1000 pressings was all that the government required,” explains Millman.

As a result many Millman-related releases are scarce/collectible, and many of the releases were on one off labels. Groups like Licorice Stix, The Pros, The Tarots - were all for different people, which explains the different label names. “I wound-up making a Tina Turner album for a plastic surgeon in Bel Air. It was a country record, probably the only one she had made at the time,” says Millman.

There was an infamous tax shelter label pressing at the plant Millman used in Herndersonville, TN, but Millman says he had nothing to do with them. Tiger Lily earned a reputation for releasing demos and recordings without the bands knowledge or approval. It was run by the head of Roulette, Morris Levy, who was later connected with the Genovese crime family (and is often compared to the character of Hesh on The Sopranos.) However, it was through Mike Shepherd at the IRDA pressing plant in Hendersonville that Millman met Wesley Sanborn, for whom he provided music for the Koala label in the early 1980s. Sanborn needed “named” artists, buying 75 approx albums over 5 names, including music by Willie Nelson, Dionne Warwick, The Guess Who, Lena Horn.

One of Millmans most interesting records is The Crazy People album. It’s a collage record, an early example of sampling with a good dose of psychedelia and Monty Python in the mix. Wild Man Fischer (who also recorded with Frank Zappa) improvised over parts and a live band sessioned over the top to complete the puzzle. “I like complex releases, not so much the simplistic stuff. This was a psychedelic experience. It struck us as something different,” says Millman. He applied the same formula to The Psychedelic Experience album. Teaming-up Alan Handleman to produce the album, Millman says he sold it for release on the Everest Records label.

In the late 1970s Millman created the Startime Video Jukebox for which he was honored by the Smithsonian Museum of American History. This invention became known as the first Video Jukebox and was announced in the 98th Congressional Record.

-Andrew Jervis
With thanks to Will at Companion and Chris at the Groove Merchant.

The New Sound of

The New Sound of 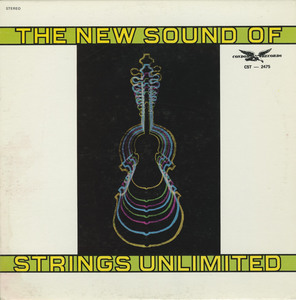