Kinnie Starr's career has taken her around the world -- across Canada, the U.S., Europe and Asia, but she is first and foremost an artist and activist. Her activism began before her career in music as a visual artist, and her current visual work continues to touch on her areas of interest: race, home, family and humanity. Most recently, she collaborated with director Stephanie Clattenburg on the 2016 documentary, Play Your Gender, which explores the realities of being a woman in the music industry, a business in which fewer than 5% of producers are women even though many of the most bankable stars are female.

Her 2018 album, Feed the Fire, comes out of much reflection done in the aftermath of a taxi cab collision that resulted in a brain injury. Her road to recovery deepened her interest in the nature of communication in an era where immediacy is king and anxiety disorders rise alongside extroversion and "urgent" digital chatter. Feed the Fire is a critical look at where we are at in our relationships to the screen, to our faiths, and to each other: our devices allow us to stay up all night viewing porn, fighting for likes or hype on social media, tailoring our public personas as a means of delivering toxicity...or warmth. Feed the Fire is about hope and despair in perilous times and reconnecting with our truest selves

"In many ways, the 10-song album seems like hallmark Kinnie Starr. It can be fierce, uncompromising, angry, despairing, funny and uplifting while showcasing a number of styles that the genre-hopping artist has mastered since beginning her recording career more than 20 years ago."
-Eric Volmers, Calgary Herald 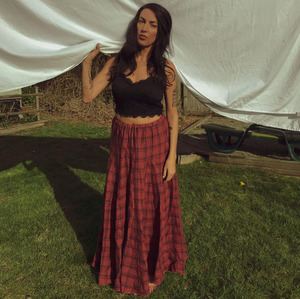