The Spy's exploded on the local rock and roll scene in Windsor, Ontario in 1978 because they were something it had never tasted before: wild, raucous, debaucherous streetsmart punk rock and roll. The Spy's started when some buddies went to a show at The Old Miami in Detroit and caught their pal - guitarist Dale "Elad" D'Amore - up on stage jamming with former MC5 guitar great Fred "Sonic" Smith. It was then they knew they had to build a band around their axe slinging friend. And so The Spy's were born - featuring Frank Carlone on vocals, "Coma" Joe Desrameaux on bass and vocals, Dave O'Gorman on drums and the catalyst, D'Amore on guitars. They quickly began tearing up anywhere they could play, from Windsor to Detroit and back again. They left blood, sweat and beers (all empty) wherever their onslaught took them. Their shows became events and everyone knew that Windsor had conquered the underground. They released the Machine Shop/Underground 7" in 1980 and soon agents and promoters from around the country came sniffing. But the pressures of possible commercial success started to suck the fun out of the band and in the late 1980, the Spy's dissolved. D'Amore and Coma Joe merged with The Hard-Tops to form The Nelsons, Windsor's first punk supergroup, while O'Gorman joined rival punk gang The Dry Heaves. Carlone moved on to Toronto to form The Ronald Reagan Story. The Dry Heaves have had several reunions since, the most recent being the live recording in 1995 at The Loop in downtown Windsor. D'Amore is still active in the local music scene, leading The Guitar Army. Although their run was brief, their impact was enormous - almost everyone who experienced the Spy's went on to form their own bands, many of them influential in their respective scenes.
- Jamie Greer, The Windsor Scene 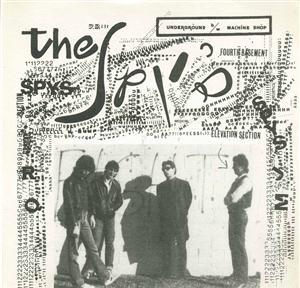