silver mt. zion was born in 1999. thierry (contrebasse), sophie (violin), efrim (piano), mark (electric bass). we played our first show at the constellation loft. efrim wrote the music in pencil in the pages of a dollar store notation book=a failed experiment in self-taught music theory that did not stick. later on, we recorded those songs onto 1/2-inch 8-track at thee mighty hotel2tango. mark moves to england and aidan plays some drums. wanda was dying, and we made the record for her. efrim sings on a song that he wrote on a schoolbus in the middle of a clearcut north of thunder bay when godspeed was still broke. while designing the LP’s insert card, we change our name to “thee silver mt. zion memorial orchestra & tra-la-la band”.

a couple of years later and we book our first tour. european winter. we add three new members= beckie (cello), ian (guitar), jessica (violin). spend three weeks rehearsing, a pair of local shows, and then we get on an aeroplane. 5 weeks of playing quietly to drunks, and a bad digital piano. live-sound by german paul. we wrote “the triumph of our tired eyes” on the road. came back home and recorded our second LP straight away. mixed it slowly, before and after the riots in quebec city, and named it “born into trouble as the sparks fly upwards”. hardly any piano this time, but a whole lot of bowed strings and very many noisy guitars.

a year and a bit later. we write a bunch of songs in our jamspace and record our third LP. “this is our punk-rock, thee rusted satellites gather and sing”. the neighbourhood’s changing, and nobody’s laughing at america’s president yet. aidan plays some drums again, and we hustle up an amateur choir. we decide to tour again, but loud this time. scott from black ox orkestar joins us on drums and guitar. we set up in a semi-circle and tear each other’s heads off. also, we start group-singing together. first show with this lineup is at clinton’s in toronto. a handful of shows during canadian winter and then back over the ocean again. nick does our live-sound but then disappears, so radwan takes the reins.

we tour steadily for the next few years, and record “horses in the sky”. the world, as always, seems totally fucked. we record one of the tunes around a campfire in the laurentians. emma the dog spends the night staring balefully into the darkness as the embers fade. we tour north america proper for the first time. colorado is a lowpoint, as is saskatoon.

somewhere in the middle of all that noise, scott leaves to be an american again. eric from hanged up takes his place. more tours, more highways. we record “13 blues for thirteen moons”, the first time we make a record of songs that we’ve played live forever. pitchfork implies that we’re terrorists and we license a song to the abc television network. more touring and then beckie, eric and ian leave the band. a summer of regret, and we drop the “tra-la-la band” from our name. dave becomes the new drummer, and efrim is the lonely guitar. we tour europe again and play many places that we’ve never been to before. the global economy collapses while we play latvia. tristan is the new sound-dude. poland is heavy.

we record “kollaps tradixionales” in the summer of 2009. jessica and efrim have a baby. the new record’s got songs that we wrote as the tra-la-la band, and a couple of new ones too. touring again, and we’re ten years old. in our own country we’re pretty much invisible.

we believe in what we do, and move forward slowly. we’re lucky and we know it. we earn an honest living, though it gets harder all the time.

see you on the road…

Born into Trouble as the Sparks Fly Upward

Born into Trouble as the Sparks Fly Upward

This is Our Punk Rock Thee Rusted Satellites Gather + Sing

This is Our Punk Rock Thee Rusted Satellites Gather + Sing 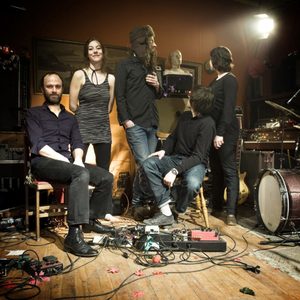