Actor William Shatner has yielded a unique, much-criticized, and much-parodied body of work during his musical career. Shatner, a vocalist, typically speaks the lyrics instead of singing them, often as an exaggerated interpretive reading.

Shatner's musical career began in 1968 with the release of his first album, The Transformed Man. Shatner used the album to compare contemporary pop songs of the period to the works of William Shakespeare by providing dramatic readings of Shakespeare interspersed with dramatic readings of the lyrics of songs such as "Lucy in the Sky with Diamonds" and "Mr. Tambourine Man". However, this first release was widely mocked and parodied for its unusual style; at the end of "Mr. Tambourine Man", for example, Shatner suddenly shouts the song's title in a tortured voice. The album would later be panned on the Internet, with the "Captain James T. Kirk Singalong Page" serving clips as early as 1993.

Shatner has defended his "stylings", refusing to acknowledge it as an experiment that went wrong, and insisting instead that it was an acting performance from the perspective of an LSD user; the song Lucy in the Sky with Diamonds has often been abbreviated to LSD. This piece of music has been singled out by both Dave Barry and Mad magazine as being, in Mad's words, "truly unfortunate". George Clooney, for instance, chose this as one of the Desert Island Discs he would bring along if marooned – as an incentive to leave the island. He said, "If you listen to [this song], you will hollow out your own leg and make a canoe out of it to get off this island." In a 2003 Music Choice poll, it was voted as the worst Beatles cover of all time.

After The Transformed ManIn 1977 a live double album titled William Shatner Live was released. Recorded on a live tour shortly before, it features Shatner performing excerpts from The War of the Worlds and Cyrano de Bergerac, among other things.

In 1978, Shatner hosted The Science Fiction Film Awards where he performed Elton John's "Rocket Man" (again, in a spoken voice). This performance has been parodied by the TV show Family Guy and musician Beck, to name a few. Another live double album by Shatner, Captain of the Starship, was also released in 1978. In this era he also did a handful of other spoken word renditions of other pop songs, such as Harry Chapin's "Taxi" (which he performed on Dinah Shore's television talk show Dinah!).

Shatner has occasionally spoofed his earlier musical career. At the 1992 MTV Movie Awards he performed all five of the Best Song From a Movie nominees. More recently, he performed in the same style for a series of Priceline.com television commercials. One such commercial featured Shatner with frequent collaborator Ben Folds performing an irony-laden version of the Diana Ross hit, "Do You Know Where You're Going To?". Shatner also appeared on Ben Folds's "In Love" (on the album Fear of Pop: Volume 1).

In the 1998 film Free Enterprise, Shatner performed "No Tears For Caesar" in the movie's closing scene with rap artist The Rated R, with Shatner performing Mark Antony's speech from Julius Caesar over Rated R's rap. In the 2000 film Miss Congeniality, Shatner performs the song "Miss United States". This song is included in the soundtrack album for the film.

On June 28, 2002, Shatner performed together with Brian Evans at the San Carlos Institute Theatre in Key West, Florida. He performed the songs "What Kind of Fool Am I" and "The Lady Is a Tramp". The concert was later released on the album Brian Evans Live with Special Guest: William Shatner.

In his appearance on the "Where No Fan Has Gone Before" episode of the animated science-fiction TV series Futurama, aired on April 21, 2002, Shatner recited Eminem's hit "The Real Slim Shady" during a feast, both raising and answering the question of how one can perform a spoken word rendition of a rap song. His performance style was also spoofed in an earlier episode, "Amazon Women in the Mood", where Zapp Brannigan (himself an extended parody of Shatner's role on Star Trek) performed a spoken-word version of The Kinks' "Lola".

Shatner's spoken-word style was also parodied on The Simpsons, with a spoken-word version of Homer's Christmas carol, "Everybody Hates Ned Flanders" playing on the radio in the episode "Dude, Where's My Ranch?" (2003). In the episode "Treehouse of Horror X" (1999), the Comic Book Guy (as the super-villain "The Collector") uses "the only working phaser ever built" which "was fired only once to keep William Shatner from making another album."

Has Been to present dayIn the fall of 2004, Shatner released a new album entitled Has Been, produced and arranged by Ben Folds and with songs composed by Shatner and Folds. The LP has been critically acclaimed for its unique "pop-driven" style. Its sole cover, a version of Pulp's "Common People" performed with Joe Jackson, has received good notices, often to the surprise of the reviewers.

On June 9, 2005, Shatner performed a reworked rendition of "My Way" at the presentation of George Lucas's AFI Life Achievement Award, backed by a chorus line of dancers in Imperial Stormtrooper costumes who ultimately picked up Shatner and carried him offstage. On December 11, 2005, Shatner opened up Comedy Central's Last Laugh 2005 by performing as Lucifer, singing a song about how 2005 was a good year for him as the devil.

On March 29, 2006, TV Land aired an episode of their Living In TV Land series centered on Shatner and subtitled "William Shatner in Concert". The episode features footage of Shatner working with Ben Folds on Has Been, plus live footage of Shatner performing with Folds' band and Joe Jackson, ending with a defiant rendition of The Transformed Man's "Lucy in the Sky with Diamonds" that is punctuated by Shatner giving the finger.

Brad Paisley's music videos for "Celebrity" and "Online" both feature Shatner as well. Shatner also appears as a studio producer in the music video for "Landed" by Ben Folds.

Also in 2007, a ballet called Common People, set to Has Been, was created by Margo Sappington (of Oh! Calcutta! fame) and performed by the Milwaukee Ballet. Shatner attended the premiere and had the event filmed. The filmed footage eventually turned into a feature film called William Shatner's Gonzo Ballet, which had a very well-received World Premiere at the Nashville Film Festival on April 17, 2009.

On July 27, 2009, Shatner gave a "poetry slam"-style interpretation of Sarah Palin's farewell address on The Tonight Show with Conan O'Brien. He returned to the Tonight Show on July 29, 2009 and performed a few of Palin's Twitter "tweets". Shatner went on the Tonight Show again on December 11, 2009 to read excerpts from Palin's Going Rogue: An American Life, but this was followed by an appearance from Palin herself reading excerpts from Shatner's autobiography, Up Till Now.

On the fourth episode of sitcom $h*! My Dad Says, where Shatner has a lead role, his character Ed Goodson makes a Karaoke performance of Right Said Fred's "I'm Too Sexy", also in spoken-word. On the same scene, "Rocket Man" (performed by Shatner in the 1978 Saturn Awards) is mentioned as a waitress asks Ed if he wants to sing it and he answers "Not tonight!".

On November 4, during an television appearance on the Lopez Tonight show, Shatner performed a cover of Cee Lo Green's song Fuck You!.

Seeking Major TomShatner has announced via Twitter that he plans to release a new album in 2011, entitled Seeking Major Tom. Confirmed to be working on the album with Shatner is Zakk Wylde of Black Label Society, Peter Frampton and Brian May of Queen. The album is reported to have a space odyssey theme, and to be centred around the genre of heavy metal. The Washington Post also claims the album to feature covers of songs such as the Foo Fighters' Learn to Fly, David Bowie's Space Oddity and Queen's Bohemian Rhapsody.

Shatner on ShatnerIn an interview in the September 21, 2004 issue of Newsweek, Shatner was asked "Doesn't it bother you that your version of 'Mr. Tambourine Man' is a camp classic?" He replied,

...yes, in the beginning it bothered me that people singled it out and poked fun at it. They didn't know what I was doing. The album The Transformed Man is much more extensive than that song. But since people only heard that song, I went along with the joke.
[edit] Music by other Star Trek actorsShatner was not the only Star Trek star to record music. Leonard Nimoy's versions of "If I Had a Hammer" and the children's song "The Ballad of Bilbo Baggins" are widely considered to be comparably camp recordings. Star Trek's Nichelle Nichols, who sang on some episodes of the show and also in Star Trek V: The Final Frontier, also recorded two musical albums, and Brent Spiner of Star Trek: The Next Generation recorded at least one. Tim Russ (Star Trek: Voyager) released four albums.

In 1996, MCA Records released a single-CD compilation of Shatner and Nimoy's collected music output, under the title Spaced Out: The Very Best of Leonard Nimoy & William Shatner. It included the above songs, plus other contributions.

Captain of the Starship

How Insensitive b/w The Transformed Man 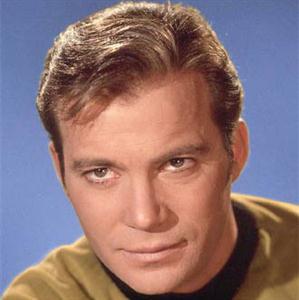