In the five years since Said The Whale formed, the band's hook-heavy, pop-rock sound has propelled them to successes that include a nationally televised documentary, a JUNO Award victory, and a seemingly endless series of tours around the globe. In an age of overnight internet sensations, theirs is a true grassroots success story that has allowed the group — featuring dual frontmen Tyler Bancroft and Ben Worcester, drummer Spencer Schoening, keyboardist Jaycelyn Brown and bassist Nathan Shaw — to take its place among the Canadian indie rock elite.

After uniting in early 2007, the band wasted no time in releasing the EP Taking Abalonia, which was reissued the next year with seven new songs as the debut full-length, Howe Sounds/Taking Abalonia. Said the Whale put out the follow-up LP Islands Disappear in 2009, and quickly won over a legion of new followers when the crunchy power-pop hit "Camilo (The Magician)" became one of the most played Canadian songs on Modern Rock Radio in 2010.

Audiences all around the world quickly began to take notice of the fast-rising musicians, who performed at increasingly high-profile gigs including the Vancouver 2010 Olympics and nationally televised Canada Day celebrations on Parliament Hill. In 2011, the band toured in the U.S. and U.K. and earned international praise from Consequence of Sound, We All Want Someone to Shout For, You Ain't No Picasso, and BBC Radio 6. Back home, Said The Whale won a JUNO Award for New Group of the Year, and the U.S. tour was chronicled by the nationally aired, CBC documentary Winning America.

Following the teaser EP New Brighton, all of the band's efforts have culminated in the new full-length Little Mountain, out on March 6, 2012. Named after the band's home neighbourhood in Vancouver, the 15 track collection was recorded at the city's Blue Wave Productions studio by returning producer Tom Dobrzanski (The Zolas, We Are the City). The producer's experience working on both of the band's previous albums meant that he was able to help the Whales realize their clear vision for the project, which they fine-tuned during an extensive two-month pre-production period.

"Tom is amazing to work with because he's a friend and in the studio he becomes like the sixth member of the band," explains singer-guitarist Bancroft. "He knows how we operate and he knows how to make us perform our best, and is able to capture it on record."

The recordings were then handed to mixer Jack Joseph Puig, a multiple Grammy winner who was selected in part because of his work on Weezer's lauded Pinkerton. Bancroft admits that this brush with one of his heroes was both "terrifying and rewarding."

With the help of these studio collaborators, Said The Whale has crafted its most adventurous effort yet; with juggernaut production values, intricate song suites that explode out of the speakers, and tracks that blend seamlessly into one another, it finds the group defying rock conventions without sacrificing any of their pop smarts. More diverse than previous albums, Little Mountain is a multi-stylistic tour-de-force that ventures into everything from soaring, horn-laden cabaret ("The Reason") to jaggedly syncopated rock ("We Are 1980") and effervescent guitar pop ("Loveless").

As always, singers Bancroft and Worcester retain their unique voices, but their work has never sounded so cohesive; the tracklist was carefully selected for front-to-back listening, and the five-piece's all-inclusive collaborative approach to songwriting helped to forge the bond between noisy electric stompers and intimate acoustic ballads. Tellingly, all five members share equal writing credit.

"Ben and I came to the table with our songs in more of an unfinished state than usual, which allowed the rest of the band to be a little more creative," observes Bancroft. The album even includes the band's first-ever track sung by a member other than the two frontmen, as drummer Schoening takes over lead vocals on the flat-out-gorgeous piano serenade "Seasons."

With the new wave-tinged single "Heavy Ceiling" already making its mark on the Canadian rock/alternative charts and videos for all 15 album tracks to exclusively debut online, Little Mountain is shaping up to be one of the landmark rock albums of 2012. And if the last five years have taught us anything, it's that Said The Whale will continue to win over audiences the old fashioned way: with relentless touring, killer songs, and big-hearted passion. 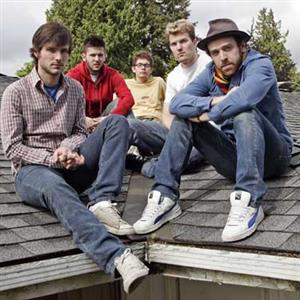