Edmonton native Moe Berg watched his father play in country bands while he grew up, and spent his time admiring guitarists like Eddie Van Halen, Jeff Beck and Johnny Winter. In his teens and early 20's he pursued his musical ambitions with area bands like the Modern Minds, Troc '59 and Facecrime. It was in Troc '59 that he hooked up with drummer Dave Gilby and in 1985, they agreed that the only way to keep going musically was to move to Toronto and try things out there.

The original cast (clockwise from upper left): Tasha Amabile, Johnny Sinclair, Tam Amabile, Moe Berg, Dave GilbyBerg arrived first and promptly began a solo acoustic act that he took to any bar that would have him. It was while he was doing this that he met Saskatoon native Johnny Sinclair and the idea of TPOH began to take shape. By 1986 they had added Winnipeg-born sisters Tam and Tasha Amabile for backing vocals, and the band began playing the Toronto area. A song that Berg had written in the summer of 1985, "I'm An Adult Now", was a constant audience favourite, so Berg's director friend Nelu Ghiran made a low-budget video of the song, which was promptly picked up by MuchMusic and "Toronto Rocks" (on CITY-TV), and suddenly the independent 12" single the band had pressed was totally sold out. Sensing the burgeoning interest in the band, WEA Canada picked up the single, repressed and repackaged it, and distributed it across the country. Now the band had a cross-country hit. Such was the band's independent success that they received Juno nominations in 1987 for Most Promising Group and Best Video.

WEA did not exercise its option to sign the band to a full deal, so in 1988 the band put out another 12" single called "Killed By Love" which was also a regional hit in the Toronto area. Constant playing anywhere and everywhere earned the band a reputation as being one of the strongest and loudest acts in the area, and all this activity caught the interest of Chrysalis Records. At this point the Amabile sisters decided to pursue their own musical interests (with their band Femme Fatale), and guitarist Kris Abbott and Leslie Stanwyck were brought on board for backing vocals. After signing the band, the label got the idea to pair the band with mega-producer Todd Rundgren. Rundgren ventured to Toronto in 1987 to see the band live at the from inside Love Junk (l. to r.): Kris Abbott, Dave, Moe, Johnny, Leslie StanwyckDiamond Club. TPOH went into the studio with him and the result was 1988's full-length debut, Love Junk.

Completely re-recording "I'm An Adult Now", it was the album's first single, once again garnering considerable critical and public praise, and the new video once again became a MuchMusic staple, although MTV in the US initially banned it, citing lyrical references to sex, alcohol and drugs; it was later added to rotation and the band even did a live spot on the famous music station. The album eventually went platinum in Canada (100,000 copies) and sold over 100,000 copies in the States.

One Sided Story touring lineup (l. to r.): Brad Barker, Kris, Susan Murumets, Dave, MoeThe group returned to the studio with Rundgren for their second Chrysalis offering, One-Sided Story (1990). Another lineup change occurred after recording had been completed as Stanwyck and Sinclair left to do their own musical things, so Halifax native Brad Barker (bass) and Susan Murumets (backing vocals) joined full-time. Berg's reputation for being a funny, intelligent, masterful songwriter was solidified. Although not selling quite as well as Love Junk, the album still went gold in Canada (50,000 copies) and their constant touring continued to draw sell-out crowds and enthusiastic reviews from the media.

For The Downward Road: Dave, Kris, Moe, BradLabel troubles forced the band to take an unexpected three-year hiatus, but they got signed by Mercury, hooked up with producer Ed Stasium (Smithereens, Living Colour, the Ramones) and added Rachel Oldfield for backing vocals in the interim. Their next release, 1993's The Downward Road, featured a musical collaboration with veteran songwriter Jules Shear and a guitar solo by Rundgren, and continued in TPOH's blistering pop vein. Although not selling as well as the previous two releases, it nonetheless garnered just as much critical praise, and live they still sold out venue after venue based on their reputation as being one of Canada's best performing units.

For Where's the Bone: Kris, Brad, Dave, Moe, Rachel OldfieldThe last two band albums, 1995's Where's The Bone (which was followed by another lineup change - Oldfield was replaced by Jennifer Foster) and 1996's The Wonderful World Of... were both released on an independent Toronto label, Iron Music Group, and were both accompanied by tours and enthusiasm from their league of hard-core followers.

Though the band has never officially announced its demise, in 1997, Berg released the solo album Summer's Over and is currently working on a book; Stanwyck and Sinclair have continued on as successful musical duo Universal Honey; Jennifer Foster released a solo CD called 'Speedyhead' which was produced by Moe Berg and Paul Myers (Gravelberrys); Kris Abbott is pursuing a book writing career; Razor & Tie Records in the US released a 'best of' package featuring some rare material in 1999; Moe Berg has also revived TPOH's cover-band alter-ego called Monteforte in March 2000.

The Wonderful World Of

Sex and Food: The Best of TPOH

When We Ruled: The Best of The Pursuit of Happiness

Hard to Laugh b/w Walking in the Woods 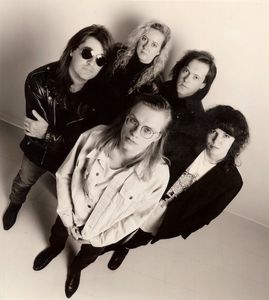