Jerry Palmer started his singing career at the age of 14 when he formed a rock and roll band in his hometown of Fort William (now Thunder Bay), Ontario. Jerry played all the teen sock hops, and he and his friend, Bobby Curtola, dominated the teen dances in that city. Jerry soon became the opening act for such artists as Bobby Vee, Brenda Lee, Johnny and Hurricanes, and Gene Vincent and the Blue Caps.

It was at one of these shows that Don Grashey discovered Jerry, and thus developed a long time friendship and a business relationship. Don was Jerrys manager for many years. When Jerry was 16, Don took him to Nashville to record in Sam Phillips new studio. Sam was the engineer who discovered Elvis Presley, Jerry Lee Lewis, Johnny Cash, and many more artists.

Jerry and Don then moved to San Jose, California, staying there for 6 months, and then going to Hollywood. They worked hand in hand with Gary Paxton of the Hollywood Argyles, famous for such songs as Alley Oop Oop, and The Monster Mash. Jerry re-recorded Buddy Holly's hit, Thatll Be The Day. The tune hit in the 40s on the Billboard Charts. He also re-recorded Walkin the Dog. While in Hollywood, Jerry appeared on Dick Clarks American Bandstand Show, and also on Casey Kasems Shebang, where he appeared on the same show as the Young Rascals.

Jerrys records were not only released in Canada and United States, but also in almost all countries in Europe. Jerry was released on such labels as Quality Records, Carlton Records, Chattahoochie Records, Golden Eagle Records, and lastly on Epic Records in Los Angeles. Jerry was signed by Epic to be their next rising star, but just when it looked like his big break had come, he got his draft notice and had to make a choice whether to stay in the U.S. or return back to Canada. Jerry decided to return home.

In Canada Jerry appeared on such television shows as Teen Dance Party with Alex Trebek as host. He also appeared with Gordie Lightfoot, who was promoting his first release on C.B.C. Club 11 in Hamilton. Jerrys Rock career started in 1961 and lasted until 1979.

In the 80s Jerry went back to Nashville and became a country singer. He had many country hits in Canada and received two B.M.I. citation awards for his writing on Ooo Mama, and One Ticket to a Lady. He appeared on the Tommy Hunter Show, and also the Ronnie Prophet Show.

Celebration Day b/w Got A Love

Oh, Lucky Me b/w Love's Comes to Me

Come Along With Me b/w Hey, Sweet Baby

That'll Be the Day b/w Together With Love

One Way Ticket to a Lady b/w Are You Mine

Not Living, Not Dying (But Just Hanging On) b/w Too Many Actors in This Play 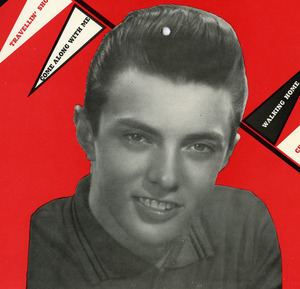