Robert: For a while, The Nerve held up the solitary New Wave flag in Edmonton. Who was in the band, where and when did the Nerve first form and how did you guys meet?
Robin: The Nerve originally formed in Saskatoon, Saskatchewan. Our singer PJ Burton had moved there from Dauphin, Manitoba and had met Gary Law in Winnipeg. When I first met PJ, he and Rod had already moved to Edmonton and I was invited to audition. I made the band and the early version of what was to become the Nerve was PJ on drums, Gary Law on bass and myself on guitar. PJ was very adept on the drums, but was looking to move out front as the vocalist, which he had done in the past. We decided to acquire a drummer.

Robin had met Joe Kelly a year earlier at a party, but knew him to be a solid hard hitting drummer and he was looking to try something new, as new wave and punk was on the scene in 1977 and '78. Joe was invited down and took up residency as the timekeeper and drum smasher. The final touch that was needed was another guitar player and Gary Keiller was called in as PJ had known him from Winnipeg where Gary had gigged a lot and knew hard loud music inside and out, and he had the chops to pull it off.

Robert: Where did you first play?
Robin: Early gigs were a bit tough at the beginning as the traditional local music scene was more attuned to The Eagles and Foreigner.. and getting gigs was tough especially in bars. But PJ was grooming the University crowd and schools as the kids wanted to see what the punk and new wave was about. Gary Law didn't stay long as his musical goals were not where the band was at, so Rod was called in to play bass, so the line up stood at PJ on vocals, Rod Wolve on bass Joe Kelly on drums, Gary Keiller on guitar and Robin Brooks also on guitar.

Robert: Although the single was given a mention in Frank Manley's Smash the State, the single by the Nerve is pretty unknown and seldom scene, even in the collector market. Where, when and how was the Nerve single recorded?
Robin: The Nerve went on to play many one nighters in bars and clubs. We decided to enter the studio to record our only 45 with the songs Penchant and Preludes, with the song writing team of PJ and Robin. The Nerve recorded this single in a small studio in Edmonton called the Machine Shop. It was an 8 track 1/2" format and those tracks were recorded right off the floor, with some vocal and occasional guitar overdub. We recorded the single in the summer of '78.

Robert: Do you guys have any spare copies of the single kicking around, how many were pressed, where the hell are they, where's the acetates and what about a re-issue?
Robin: None of us have been able to find any copies of the single. I believe we pressed 500 copies and our record release party took place in a hip/punky clothing store in downtown Edmonton.. where we gave a bunch away. I never knew what happened to the acetates and was recently in touch with the engineer and owner of the Machine Shop. The Nerve recordings no longer exist and neither do the tapes of the Smarties live at The Princess Theatre, although I have a very noisy cassette copy.

Robert: Where did you play locally in Edmonton, who did you open for, did you guys know or play with any of the other punk bands in Edmonton at the time like Rock and Roll Bitches, Malibu Kens? and whatever happened after the Nerve?
Robin: The Nerve was gaining a reputation of increasingly drawing an audience of the more unsavory punk types and our agent was finding it more difficult to find bars that would allow us to play so we changed our name to The Smarties. Robin randomly came up with the name at a bar when asked, having to disguise the real name of the band, The Nerve. Shortly thereafter, Gary Kieller left the band and was replaced by Gary Pon on guitar and that lineup continued as The Smarties.

The Smarties locally were doing opening gigs for DOA, Pointed Sticks, The Battered Wives from Toronto. The Smarties were around Edmonton when new bands like The Models, Silent Movies and News (Moe Berg of Pursuit of Happiness grabbed Kim Upright (aka Bolt), our drummer from the Nerve). At that time there wasn't a huge scene as it was just building.

After the Nerve changed its name to the Smarties, we continued to gig at Universities and fraternities and one nighters with the occasional 3 nighter at a bar. The Universities and frats paid good money and myself I never worked a day job for nearly 3 years till I went to Toronto, as the money I made in the band was sufficient for my rent etc.

Wolve, Pon, Kelly and myself continued on, after changing our name to The Ozones. PJ controlled the Smarties name, took the cash, and went on his own way and re-formed a less talented version of the Smarties. Meanwhile, The Ozones played some really good gigs. Afterwards, Rod Wolve and Gary Pon played locally in a few Edmonton bands.

Rod Wolfe ended up with Shock – a 3 piece power punk/pop band - then quickly onto synth-based fusions - Informer, then notably Voice - with Malcolm Swann, Dwayne Goettel (before his major run with Skinny Puppy). After that, forays into goth/dark wave with Shadow Project and Zen Asylum, followed by Soft, Tanyss Nixi and the Angry Mob. Rod continues to stay active in the local indie new alt Edmonton music scene and he currently plays with Cockatoo and Even#.

Robert: And what's in store for the future?
Robin: The Odd Fellows will be doing its 30 Year reunion gig in Toronto in August of 2014 that is going to be a crushing molten porridge of nasty synths, screaming sax, and molten guitar walls of noise, with crazy assed Flea bass parts and drums.

From a 1978 promo:
Dear Powers That Be: Let's Talk Turkey;
The Nerve is a little known and impoverished band closet professionals, students and warehouse rats. The group received its most recent incarnation less than a year ago and has since subjected itself to as many one-nighters and bars as possible, collectively or individually. Nobody in the band has any money and a recently administered battery of psychological tests revealed that none of them have any brains either.

That is, with the exception of "Bo-bo"; a chimpanzee. After tiring of his job as an inside postal worker, Bo-bo decided to try his hand (or foot) in rock and roll. He explained his idea to P.J. Burton ("Go ape, young man.") and left the music scene to become a famous booking agent. Burton, attracted by the near clairvoyant insight of this charismatic salon.

Bo-bo, wearing sunglasses, rushed back from Vancouver in the nick of time.
"New wave, not permanent wave", he growled.
"Right...I'm sorry", Burton exclaimed, wetting himself ever so slightly.

It was at that moment, as luck so often plays its most devious suits, that Robin Brooks decided he needed a haircut. Tying a sandwich to a parking meter for safe keeping, he strode towards the yawning aperture that doubled as a door and stepped inside. Burton dropped whomever it was he was doing. The only sound in the room was the clicking of Bo-bo's fingernails in their perpetual search for body pests.

In no time at all, the duo had formed an insurance company with Gerry Keiller. One day, Garry called everyone into his office. "Boys", he began, a basket of fresh fruit on his desk, "We have no business...here, have a banana...we should have listened to Bo-bo.".

"That damned monkey isn't worth his weight in orlon. I wish he'd get off our backs." Burton screamed, "Besides, unless we form some kind of band, this preamble will have no relevance."

And so, in the twinkling of an eye, a band was formed with Rot DeKay on bass and some one else on drums.

Then the real work began. Burton squeezed all his friends and vegetables for talent and Brooks went sour overnight. They taped small pieces of electric motors to their buttocks for inspiration. They applied their bony skulls to parked cars and concrete. They berated themselves and grew comatose. The result is as you see before you.

Thanks a lot. We're still in Edmonton working and writing catchy tunes. We're interested in your feedback. We think you dress great. Hey, that's a nice tie. Where did you get those shoes"

You're a person with taste! 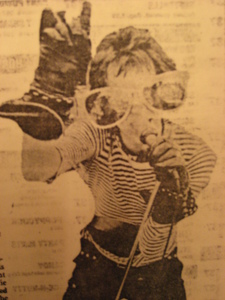 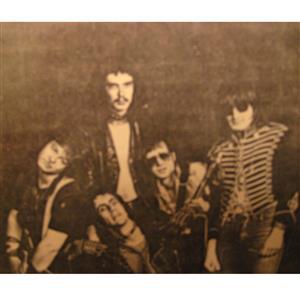