McArthur, Doug - Horses of the Sea 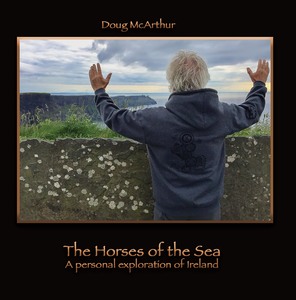 A beautiful collection of songs and stories about Ireland. It’s a wonderful album, and one that has become a fast favourite on this radio show.
-Jan Hall, Folk Roots Radio

And a terrific set of songs it is, delivered with panache and emotion. Songs of ancient kings and not so ancient conflicts.
-les siemieniuk, Penguin Eggs magazine

(Horses of the Sea) Was I supposed to cry ALL the way through? Absolutely beautiful Doug!
-Dale Barcellos - Avalanche Choir, San Jose CA

"Doug always is an arresting performer who never worries about boundaries and delivers an entertaining 45 minutes - some stories sung some spoken stories and tales - from A Pictograph of Crazy Horse to the literary scene of Jack Kerouac, Robert Louis Stevenson and Jack London who Stumble From Vesuvio into the San Francisco fog.
Tears Like Rain -
-les siemieniuk, Penguin Eggs magazine

"It can take a life time to sing with one’s own pure sound in a voice that echoes with the gift and the journey of the artist. With his new CD, Thunder into Heaven, Doug McArthur has come into his own, singing with a subtle, lyric authority that haunts the listener long after. Each cut rings true...
-Catherine Joyce - Lowdown

Born in the dawn of 2007 this album will gauge how I listen to new recordings this year.
-Chopper McKinnon Host "Canadian Spaces" CKCU.

At his best (Doug is) a lyricist with the poetic ability of Leonard Cohen
-Joe Matyas; London Free Press

First and foremost, he (Doug) remains a composer of inordinately beautiful love ballads and flinty protest songs. Its that duality, that tension, that lifts his current songbook into the quiet realm of art.
-Craig MacInnes; Toronto Star

​Congratulations to the two of you (Doug & Jeffra) for doing so much for the history and heritage of California."
-Kevin Starr; State Librarian of California)

​(Angels of the Mission Trail)..."a quietly elegant song cycle steeped in the frontier and literary history of California..."
-Mike Regenstreif; SING OUT!

​Hi Doug,
I was traveling for a few more weeks after buying the CDs of 'Letters from the Coast' and 'Sisteron'. I got back home this week and wanted to tell you I enjoyed listening to them as much now as I did 42 years ago."
Your biggest fan
-Pierre