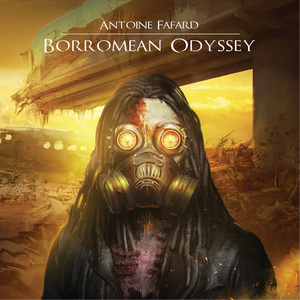 Two years on from the excellent double CD release Proto Mundi/Doomsday Vault, Antoine Fafard returns with album number six. For his latest release he has recalled Gary Husband, solely on keyboards, and occupying the drum throne this time around is Todd Sucherman.

There’s no clue as to the origin of the album title, however if we take it that ‘Borromean’, often illustrated by three rings attached in a way so that no two are linked, but the configuration cannot be taken apart without breaking one of the rings. And ‘Odyssey’ derived from Homer’s epic poem, telling the tale of Odysseus’ ten-year journey home from Troy, an epic journey so as to speak. Might it be our three musicians have forged an unbreakable link of epic proportions?

Moving on and at this point let’s introduce the band, first up the man behind the project, composer, bassist and guitarist Antoine Fafard. Given his recent solo albums have included the crème de la crème of drummers – Simon Phillips, Gavin Harrison, Vinnie Colaiuta, Dave Weckl, Chad Wackerman, Terry Bozzio and of course Gary Husband – is surely a recommendation of his playing and compositional skills. Taking up the drum mantle this time is Todd Sucherman, not a name that will resonate in fusion circles I suspect as, for almost a quarter of a century, he has been sticks man with Styx ( 😉 ). Rest assured master drum clinician Sucherman is a formidable drummer and a worthy successor, offering his own slant to the music on the Borromean Odyssey. Last but by no means least is Gary Husband, not behind the kit, however demonstrating his monstrous keyboard skills.

Finally, before we tackle the music, a quick mention of the striking but perhaps slightly misleading post-apocalyptic artwork, which may lead those unfamiliar with Mr Fafard’s music to the conclusion that this new release must be a somewhat heavy and metallic offering. Far from it, and although there’s no shortage of oomph and power on Borromean Odyssey, Antoine has not forsaken his progressive, jazz fusion leanings.

As I’ve alluded to in the past, the beauty of instrumental music is it allows the listener greater freedom to interpret and visualise, so as the somewhat tortured and constantly changing rhythms of Invisible Pastel emerge from the speakers, thoughts return to the album’s bleak and desolate album design. The tracks initial pulse, accompanied by Antoine’s menacing scene-setting guitar theme, is short-lived and replaced by a twisted rhythmical structure and augmented by Gary Husband’s tantalisingly restrained solo. The tension is palpable and only released as the piece folds back on itself to close.
Bob Mulvey, theprogressiveaspect.net