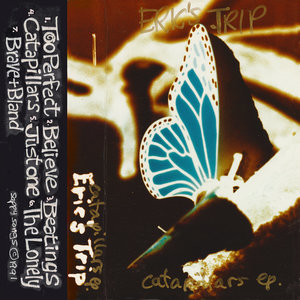 Here is a new 2019 remastered copy of the 2nd release by Eric's Trip. Recorded live on a borrowed cassette 4track in Chris's folks basement on April 7th 1991. Finished and released on cassette later that month.

We received a good local response for our first cassette through the winter. Selling 100+ copies at the local indie record store (Room 201) really pumped us up. We were rehearsing lots and writing new songs but still hadn't played a live show. That changed just after releasing this 2nd tape, when we played our first show on April 21st.

Still loud, messy and "lo-fi", we were getting our feel together more. Ed was getting better on the drums and the songs were getting catchier. The song BEATINGS was an evolution, quite peppy and went over well at shows during the summer. I'd like to mention the yelling at the start of the song was Julie and i acting. The song is about an abusive relationship so we acted that for drama. In reality our relationship was pretty light and fun, especially at this time.

I was doing other weird acoustic recordings on the side, and decided to incorporate that into Eric's Trip a bit. The song CATAPILLARS was the first of that side of the Eric's Trip sound which intermingled with our noisy tunes for the rest of the bands life. BRAVE AND BLAND is another one, and was also the start of Chris writing tunes for the band as well.

This tape and the next one "DROWNING" were released as 7 song "EP's" because we were really into those two My Bloody Valentine ep's from 1988 and wanted to do a similar thing. I kinda think of them together as our 2nd album.

Remastered from the original stereo master cassette by Rick 2019.
All songs and lyrics by Rick except #7 which was written by Chris.