Hornell, Matthew - Have It All 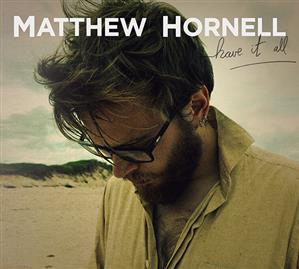 The latest release from Matthew Hornell marks his transition to a new home town, a new backing band and a shift toward a new genre.

In 2010, Matthew Hornell released an album with his band at the time, the Diamond Minds. This was an album of indie folk rock with the influence of Newfoundland kitchen parties. Based in St. John’s, they toured mainland Canada as often as they could considering the cost and effort. At some point in the past year, Hornell moved himself to Nova Scotia and found himself amongst a different bunch of musicians. With this new group of collaborators (most from the band Modern Grass) and an accomplished producer, Hornell has created an album full of stories about renegades, outlaws and pioneers that has more of a country feel than his first album.

The album was produced at The Old Confidence Lodge in Riverport, a small town south of Halifax. The studio is the pet project of Diego Medina, a musician himself who hails originally from Chile. After spending time in Banff and Toronto, Medina settled into Nova Scotia with its abundance of great musical talent. With a background in everything from hip hop to film sound, Medina has attracted the attention of Hey Rosetta!, Joel Plaskett and Chad Vangaalen. The studio is a great old building at the edge of the sea, creaking with history and charm. The recording process was analog and all of the live to tape aspects have been kept.

This is an album that sounds better every time you listen to it. The first thing to catch your attention is the unique, deep voice of Hornell himself. The mix of intricate layers and impeccable timing really showcases the stories he tells and the beautiful arrangements. Between the story lines and the instruments used, there’s a rich country feel with hints of bluegrass and folk. This record will fit in perfectly with New Country Rehab, Deep Dark Woods and Cuff the Duke.

The album gets underway with a track titled “Witness”, with a slide guitar sound that is swoon-worthy. Throughout the album, Andrew Sneddon plays mournful steel guitars and Tom Terrell expertly plays organ, keys and harmonica. Medina manages to sneak in an unexpected treasure with a drum machine on “Midnight”, but somehow it plays out perfectly against the electric and acoustic guitars and the beautiful vocal harmonies. The accompanying vocals by Jennah Barry on tracks like “Times of Trouble” and “We Could Have It All” keep you rapt in attention. Almost as surprising as the drum machine, Hornell has included one very traditional-sounding instrumental track, “Saint Andrew’s Cross”, complete with uilleann pipes and bodhrán.

If you’re a fan of beautifully crafted music and love the rich textures of folk-inspired country, this will be a great addition to your collection. While Hornell has been touring Newfoundland for the month of February, you can be sure that a cross-Canada tour is in the works to showcase this great work.
-Lee Fraser, stickymagazine.com