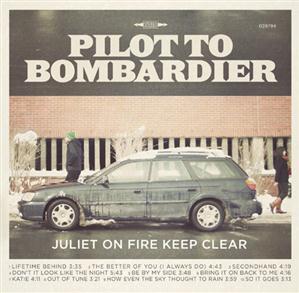 This week, ECMA-nominated musician, Bryan Power, released Juliet on Fire Keep Clear, the commercial debut of his project, Pilot to Bombardier. Following a local album release party (April 13 at the Ship Inn, St. John’s, NL) , Power and his band will embark upon a 2-week European tour, including stops in Germany, Austria, and Liechtenstein, followed by a tour of Eastern Canada in July.

Juliet on Fire Keep Clear has a maturity, both musical and lyrical, uncommon in a debut release. As the record plays, it becomes clear that Power’s reverence is not so much for love, as for loss. Yet, for an album about walking away, Juliet on Fire Keep Clear is defined by a remarkable sense of presence. Recorded live from the floor, in a studio overlooking the Atlantic Ocean, Power’s ten intimate tracks highlight compelling songwriting and genuine musical performances.