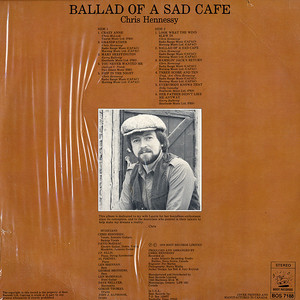 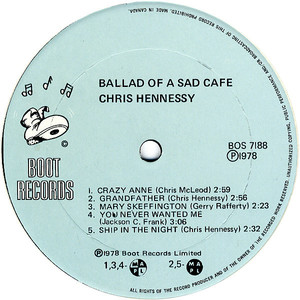 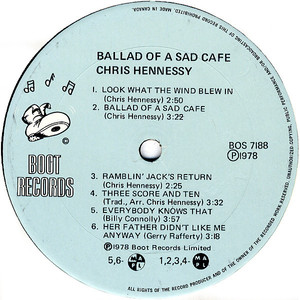 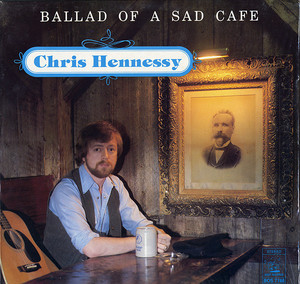 Ballad of a Sad Café

If you’ve never listened to Chris Hennessy’s album, Ballad of a Sad Cafe, treat yourself and have a listen. Or better yet? Visit O’Reilly’s when Hennessy is playing. His rendition of Her Father Didn’t Like Me Anyway, is brilliant and heartwarming, and his guitar playing?

Well, you’ll see why this now 71 year-old musical treasure has earned his way into the musical lore of this province of ours. Hennessy shares, when he’s performing live, it’s a rare occasion he doesn’t have a request to play something off his Sad Cafe album.

“Somebody always wants to hear something from that time. I think it connects people to a certain time in their lives. It came out around 1975, ‘78 in vinyl, and it feels like an awful lot of people have heard the music over the years.”

He’s always honoured to find out that his music has been a soundtrack of sorts. “When people talk to me or they come to see me, it’s a kind of a touchstone. They’re connected by the music of their past, and seeing me live, it brings them back, hopefully to a happy place.”

We ask if he has a favourite song. He pauses, thinking.

What makes me happy…
“Well, that’s a kind of a floating thing. There are various ones over the years. But, I’ll tell you what makes me happy, and that’s if I can sing a song that somebody requests because that means that it means something to them. That’s what music does for me. It helps me make others happy.”

He admits he’s also entertaining himself too, however, the goal is always to delight the audience, no matter how big or small.
“I love to hear, ‘I heard that one at a certain point in my life, so can you play it?’ That’s what makes it special to me.”

Hennessy has been around the traditional music scene in this province for decades. He’s very proud of this place and its musicians for clinging to roots while also doing ‘trad’ differently.
“The music scene here is very robust. It’s evolved over the years, and has become different things because there are young traditional musicians here now and they’re playing some sort of Irish and Celtic materials, and they’re as good as you’re going to hear just about anywhere.”

An inspiration of sorts
Rum Ragged is a good example, he adds. “They’re a fabulous band with tremendous music, just great singing and great musicianship.”
While Hennessy is quick to pass praise on, he also admits he loves hearing from those who say he was an inspiration of sorts to them. “Sometimes someone will mention that when they were a kid or when they were starting out they were inspired by me in some small way. That’s extremely special somebody would say I made a small difference in their music. That makes it all worthwhile for me.”

Hennessy came to this province in early 1974. Prior to his landing on Newfoundland soil, he was a very busy, well travelled, musician. “I had some great experiences early on in my career. I seen a lot of places, and played in almost every Irish pub there is,” he says with a laugh. But NL felt like home early on, he said.

Looking back, he wouldn’t change a thing. But then life hasn’t been all daises and roses. Hennessy had a battle, a health scare, that could have had a very different outcome.
“Just before Christmas the year before last, I was I was diagnosed with advanced prostate cancer. I had surgery, and things weren’t looking good for a while. But then everything went extremely well with the surgery and things couldn’t be looking better and there’s no evidence of anything now. So, so far, so good and I couldn’t be happier.”

Now that Hennessy is back on the stage performing, he’s hoping to connect with as many fans of traditional music as he can. Check the schedule at O’Reilly’s almost any week, but particularly around St Patrick’s weekend.

“O’Reilly’s has for years been my stomping ground, so to speak. I’ll be performing there over St. Patrick’s Day weekend and I’m looking forward to that. It’s good to go out and celebrate the wearing of the green again, you know?”

He laughs, recalling the many St. Patrick’s weekend celebrations he’s performed at over the years. He’s loved each and every one, he says.

Does he still love performing live? He’s quick to answer. “I do love performing and I love music. And it’s always been just an enormous part of my life. I’ve had a love affair with it from day one. And it stayed with me. And I’m very happy with that.”
Pam Pardy-Ghent, nfldherald.com

Ballad Of A Sad Café was written and recorded by Chris Hennessy of Torbay, NL in 1978

This is a ballad of a sad café,
Where bright lights beckon till the break of day;
The walls are shaky and the eaves are low,
The music is sad and the crowd is slow.

One old man he's been through the war,
Keeps all his medals at home in a drawer;
A dusty old cupboard of green and grey,
He wears his ribbons on Remembrance Day.

The band plays a song, it makes one girl cry,
I sat beside her to ask her why;
She raised her head, said she could not say,
It made her think of her better day.

One boy says he's been through it all,
He sits alone and he stares at the wall;
He whispers low that he's tired of life,
He said he stopped caring when he lost his wife.