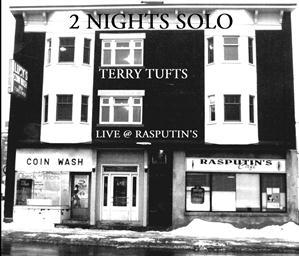 Anyone who is easily annoyed by the particular quirks of the baby boomer generation may have trouble giving this album a fair shake. The cover features a picture of a highly stereotypical aging hippie, complete with granny glasses, receding hairline, ponytail, and vaguely Native American-looking necklaces. The album notes include a bitter denunciation of the human race's "arrogance." All of this combines to induce a certain amount of cynical eye-rolling before the CD even enters the player — but at that point, the cynicism melts away. For one thing, Terry Tufts is a simply monstrous guitarist, as his instrumentals, "H'aide 'Nor H'aire" and "Soaker," immediately demonstrate. For another thing, he is a very fine singer with a voice powerful enough to carry the facile pieties that mar some of his lyrics. But best of all, he manages for the most part to avoid those pieties; most of the songs presented on this live album are romantic musings that are either wistful ("Marylou in Burgundy") or wry ("Only Half-Way Home"), while others are simply celebrations of life and its pleasures ("Tearin' up the Tundra," "Revelstoke"). There is also a very nice solo version of the Beatles chestnut "With a Little Help From My Friends." It all adds up to a live set that any fan of modern folk music will wish he or she had caught personally and will be glad that someone else captured on tape.

Terry Tufts has made his musical lifetime making other singers sound good. However, this live album from Ottawa’s Rasputin’s stage, clearly shows why Terry should not be bound to back-up work. His vocals are delivered with the same strength as his slid and impressive guitar work, even when reaching a higher register, in fact, especially in these ranges. There is something about the sound that revisits that combination of Lightfoot’s voice and Red Shea’s guitar work but spilling from only one man. Is Terry’s sound definable as Canadian, or is it just that his strings have backed many a Canadian over these past decades?

A particular standout on the CD is “Marylou In Burgundy.” This tune, not new to Tufts’ repertoire, documents the beginning performer’s hell and abuse of “No one listening, no one leaving.” Then a certain lady walks in and catches his eye and he has trouble concentrating. The song bounces on the guitar as he sings about his attraction to the Irish woman wrapped in the shawl of royal burgundy. The Irishness of the woman seeps “a wee bit” into the lyrics and the beat. “I ducked back in my song” is an appropriated visual as he notices that this Irish attraction has been waiting on a date.

Terry’s guitar work is exceptional. The opener here is a solid instrumental, and this live performance captures three instrumentals and 10 songs, including a Lennon / McCartney cover. Though I have always enjoyed what he adds musically for other musicians, it is great to hear his own voice accompanying that skill - AP
-Angela Page, Sing Out!

Canadian singer-songwriter Terry Tufts really knows how to play the guitar. His fingers weave the notes tightly together, creating a loose and comfortable musical garment that you enjoy being in. Two Nights Solo captures Terry live at Rasputin's Folk Cafe in Ottawa on October 9th and 10th, 1998. Why it took four years to bring this recording to press I'll never know, but it is worth the wait. The thirteen songs are divided up into three instrumentals that allow you to marvel at Terry's skill and ten vocals where his genial voice invites you along for the story. While the upbeat "Tearin'Up The Tundra" and the beautiful "Marylou In Burgundy" held my attention, I yearned to hear that brilliant guitar. I do not mean this as an insult. His vocals are strong but the instrumentals left me wanting to hear more of them. Try on Terry Tufts for yourself.
-James Rogers, Victoria Music Review