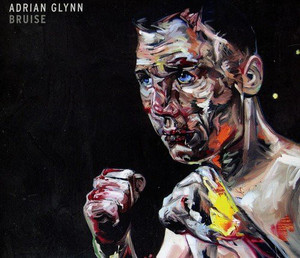 Bruise sounds rough-hewn, but I don’t mean clumsy in any way. If honesty had a sound, this would be it. The incredible intimacy Vancouver’s Adrian Glynn has created on his debut album is what gives each track its strength. A 100-year-old balaika was apparently played on “Mother Mary,” which evokes images of whirling skirts and dusty boots stomping faster and faster to a glorious end. Bruise sounds gritty and weary, and you can hear a lot of chord changing, but it works, especially on the beautiful “Blue Belle Lament,” which sounds like a nomad’s lullaby.

I’m not going to cite influence I have no idea about, but quite a few of the tracks have a hymn-like quality. Glynn’s voice shines with or without accompanying instruments. Unfortunately, several awkwardly timed pauses in the acapella track “The First Time” bring the album off to a weak start. The title track is quiet and gentle, where guitar harmonics abound. “Seven or Eight Days” is a heartbreaking story about lost love but is super slinky and struts its stuff to a great drum beat. And “When Everything’s Right With the World” features vaguely cabaret-style piano and blurry vocals. Bruise is a collection of 12 thoughtful songs that can come off as reserved and rustic, but which, once you get in a good listen, has a ton of passion.
-Adrienne Yeung, Stylus