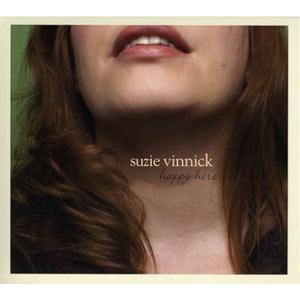 Toronto, ON-based Vinnick is something of a roots music Renaissance woman. An award-winning blues bassist, she is also a highly accomplished singer-songwriter. Her solo work jumps genre barriers with the ease of an Olympic Hurdles gold medallist, as shown on Happy Here. She’s equally at home in folk, blues, pop and country, and has come up with her best work yet. Big creative assists go to producer Stephen Fearing and a formidable cast of co-writers that includes Fearing, his Blackie comrade Tom Wilson, Josh Finlayson (Skydiggers) and Michael Johnson. The A-list of musicians includes Gary Craig, John Dymond, Kevin Breit (Norah Jones), Dennis Keldie and Kevin Fox (Sarah Slean). Horns and strings are frequently used to create a lush and full sound, though the latter occasionally seem excessive. Sometimes less can be more, as on album highlight "Prison Of Shame,” a powerful ballad featuring Breit’s simmering guitar, Fox’s rich cello and Vinnick on piano. An obvious reference point on cuts like "Looking For A Kiss” and "One More Day” (another highlight) would be Bonnie Raitt. Vinnick has often placed high in international songwriting competitions and her dedication to craft has paid off with the high calibre of compositions here. Check it out. You’ll be happy here.
Kerry Doole, Exclaim

Singer-songwriters are dime a dozen - and that accounts for inflation. They come. They go. Many of them have the requisite 'voice’ and necessary perspective while some possess the talent required to attract your attention. Yet few rise above the ether.

Suzie Vinnick is different. Like so many others, she doesn’t perform because she wants to. She performs because she’s driven to. And, as anyone who’s followed her career knows – she never merely attracts your attention. She captures it – and holds it prisoner.

Possessed of a distinctively alluring voice – once described as being "spun of gold " – she has the power and grace to project it through finely-crafted (and increasingly self-penned) songs that make you sit up and wish you knew her better. Her lust for constructive collaboration and her instrumental dexterity has rendered her irreplaceable to countless musicians, providing her with musical hearth and home in any configuration in which she chooses to play. Yet, with the release of her latest solo album – Happy Here – Suzie Vinnick serves notice that it’s her time to claim the same spotlight she’s always been so eager to share. "I feel the need to pull the reins in a bit and focus a little more this year, " she says of her penchant for alternate projects. Time well spent with The Marigolds, Betty & the Bobs, Vinnick-Sheppard-Harte and a long standing artistic affinity with Rick Fines have taught her much, refining her game while providing the spontaneous outlets she needs to get the most from each day. In truth, they permit her to get outside herself while polishing her instrumental skills, her harmonizing, her vocal range and, indeed, her multiple personalities. Yet, Happy Here is an artistic statement that speaks to the realization that the time has come to move forward based on her own merits. She has much to be happy about.

All artists dread to be name-checked or pigeon-holed. Yet if such is necessary to help define Suzie’s wide-ranging stylistic muse, then references to no less than Emmylou Harris, Shawn Colvin, Joni Mitchell and Rickie Lee Jones are more than called for. Like Harris, Suzie remains a restless creative spirit who has blazed her own trail by fusing multiple elements of folk, country and rock and roll, constantly evolving her sound by taking risks with originals and covers alike. Like Colvin, she's an established song craftsman, investing her substantial pop smarts into an ever-burgeoning canon of her own creation - and she’s one who also benefits from open-minded collaborations along the way. Like Mitchell, she’s a maverick – eager to explore territory beyond the mainstream, investing elements of her personality across whatever backdrop she deems most appropriate (folk, jazz, R&B). Finally, Rickie Lee Jones – to whom she shares a special kinship as a musical pioneer, also shares an elastic vocal ability, a soft spot for a heartfelt lyric and a penchant for surprise.

Unlike any of these, however, Suzie remains an undiscovered gem – well overdue the savoring of her just desserts. She’s worked tirelessly throughout her career to create the record that is destined to turn heads, to thrust her onto the world stage. Happy Here hereby moves Suzie from the passenger’s chair to the driver’s seat as she brings all her skills and seasoned confidence to bear on the mission ahead. Produced by Stephen Fearing, Happy Here is a masterwork and – creatively – a clearly defined mark-in- the-sand. Whether she’s cooing like Dusty through the positively sublime "Believe In Yourself " or purring alongside Paul Reddick on the hook-rich "Looking For A Kiss", Suzie declares ownership of the turf. From the drop-dead, quintessential Vinnick song – and title track, with its pedal steel and percussive rhythm, Suzie simply soars above each exotic mix. Fearing pulls out all the stops to tastefully embellish that crystalline voice to redefine her rootsy blend through use of harp, strings, horns, accordion, mandolin and guitar as required. Case in point – "My Kind of Loneliness " – as perfect a song and as blissful an arrangement as has ever come together on a Canadian recording. Vinnick’s songwriting has been acknowledged with several high profile awards over the years but her hand is clearly involved in each of the fourteen tracks found here.