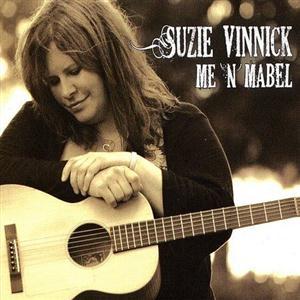 Given her strong reputation within the Canadian blues scene (she has won six Maple Blues Awards), it's surprising to learn that this is Vinnick's first strictly blues solo album. On acclaimed releases like 2008's Happy Here, Vinnick explored folk and roots terrain, but this isn't anything but the blues. The "Mabel" of the title is her beloved acoustic guitar, and it's the primary instrument. Cameos are taken by Rick Fines (he and Vinnick have recorded as a duo), Roly Platt, Chris Whiteley and Tony Diteodoro, but this is basically a true voice-and-guitar solo album. Vinnick has an expressive, versatile voice (Bonnie Raitt is an apt reference point) to match her fluent playing, while her five originals showcase her compositional skill. She has some notable Canadian co-writers here, including Dan Kershaw, Rita Chiarelli (their "Get Some" is a highlight) and David Leask. The covers include Willie Dixon, Bob Dylan, Hoyt Axton and Percy Mayfield tunes, showing she's a woman of fine taste. Vinnick has reportedly played many of these songs solo over the years, and it shows in the recording's relaxed vibe. You can expect the blues crowd to warmly embrace this stripped-down, convincing work.
-Kerry Doole, Exclaim