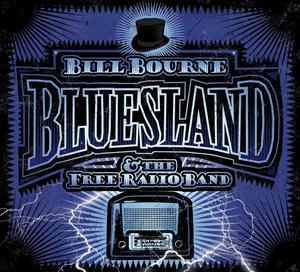 This, y'all, is most definitely country blues. Had Roy Rogers smoked him a few joints and downed a fifth or three of Jim Beam's best, he'd've taken this route instead of being a butch Betty Crocker in chaps and a mask. Bill Bourne has down cold what most can't figure out in a tornado, a strain of the blues so earthily transplanted that you have to wonder if it isn't a whole new form. Even Billy Gibbons and the boys are gonna pull those snowy beards aside and mutter "Whoa…what's this cat doin'???" Should there be any doubt, he and the band recorded this entire disc "live off the floor", but I'm bettin' ya won't believe that at all; which shows to go ya just how steeped and smokily dusty the entire Bluesland affair is.

Of course there's the matter of Bill's progeny, son Pat Bourne, and his sizzling period (60s/70s) guitar burning down from the skies atop dad's rhythm refrains and Pa Joe's more jazzy strains. Yet another example of just how damn fertile the musical terrain is way up there in Canadaland, this disc does for Texan bluesrock what Neil Young in the 70s did for country rock: bred in a whole new dimension. Bill's voice, as well, has a dyed-in-the-wool authentic twang, resonant, no bullshit affectations, as though he might've opened for Bob Wills or Hank Williams Sr. in a nicely wrecked gin joint in Tulsa way back when, dodging thrown beer bottles and keeping an eye peeled for the constabulary barging through the back door.

Who's Knockin'? carries a very deep aquifer of folk and hill influences, a song that should soon enter the ears and repertoires of sundry bands hither and yon, containing all the ingredients of a no-doubt-much-to-be-covered track. Dylan's Maggie's Farm enjoys a yip, yodel, and shout in Bourne's rendition, returning to the well long before its more modern Village roots, digging a post hole in the sod so's the scorpions, Jerusalem crickets, and rattlesnakes can all pile in as hired hands flip Maggie the bird and head for the big city. No matter where you go in this release, whose production and engineering masterfully twine the grit and heat of the past with the technical clarity of the present, you're going to better understand the myriad influences that affected and still bore right into the blues—after all, why do ya think Ray Charles was one of America's best country singers? Bill Bourne could probably teach a seminar on just such matters.
-Mark S. Tucker