Harpoonist & the Axe Murderer - Checkered Past 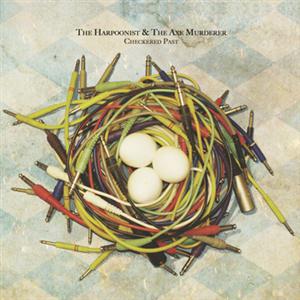 Some bands get offended, even outraged, when compared to another act.

But Vancouver’s The Harpoonist & the Axe Murderer see things differently.

In fact, the acoustic blues-folk duo, which has been described as Canada’s answer to The Black Keys, uses the comparison as a marketing tactic.

Although not entirely similar, the two groups share a talent of blending a classic, swampy blues style with modern pop sensibilities.

“There are a lot of people who say, ‘Oh we don’t sound like anybody else.’

But I think we’re past that phase in our life. It’s really nice to have other people out there who are blues musicians who are popular like The Black Keys. You don’t have to dumb things down, but it’s nice to be able to give people a reference point.”

Hall says the mainstream popularity of such blues-based acts as The Black Keys and The White Stripes (as well as pretty much any other Jack White-related project) during the past decade has helped the band find an audience.

And the duo is hoping to increase that fanbase with its upcoming new album, Checkered Past, being released in October.

“The stories are of pretty seedy characters and pretty dire situations. But we didn’t want the whole album to be dark. The melodies aren’t dark.

“We wanted to make sure we wrote a more cohesive record this time.”

Hall and bandmate Matthew Rogers have been playing music together for the better part of a decade. But it wasn’t until Rogers returned to Vancouver from Montreal five years ago that The Harpoonist & the Axe Murderer started to find its niche.

“When I was in Montreal, I really immersed myself in the guitar stylings of old blues legends like Robert Johnson, Muddy Waters and Son House,” says Rogers.

“The idea hit me that it would be a lot of fun to start a blues-based duo with Shawn, and he immediately agreed.”

As for the band’s odd name, Rogers explains it was inspired by the Kris Kristofferson song, Me and Bobby McGee.

“He sings, ‘I took my harpoon out of my dirty red bandana,’” says Rogers.

“I had never heard the blues harmonica referred to as a harpoon. I thought, ‘We have to use that in our name. So Shawn is the ‘Harpoonist’ because he plays the harp and I’m the ‘Axe Murderer’ because I play the guitar (often referred to as an axe.) Rogers admits the name had led some people to believe the duo’s sound is akin to death metal.

“Some people are scared of the name,” he says.

“We try and offset the scariness by using a cute bear and fox playing our instruments as our logo.”
-Lisa Wilton, Calgary Sun