Ryan, Sherry - Sister of Mine 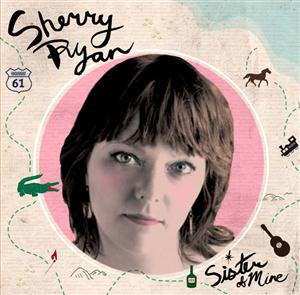 This idea began its life and just got better and better. Thinking that it would be an interesting undertaking to help out the Museum of Canadian Music by interviewing an artist from my native Newfoundland and Labrador, I decided to contact Sherry Ryan to talk to her about what she’s been up to these days. After some searching around I managed to reach her and she graciously accepted my invitation to meet.

What can be said about Sherry Ryan? Well, there’s charming, articulate, talented, funny…all of that and more. There’s a gentleness in her voice and her manner as we sit in the window seat of the Yellow Belly Brew Pub discussing music, yoga, Newfoundland & Labrador, Mississippi, New Orleans, Harry Nilsson, marriage, French pastry, the weather and her upcoming album due for release in the fall.

It’s the middle of July and I’ve been sitting here waiting for her to show having already ordered one of the house specialties, the Fighting Red Ale. She shows up, orders a Bitter and takes a seat as we make our introductions. Another not unusual coincidence here in this place on the far eastern edge of North America is that we know a few people in common. The lady who made our connection is a longtime friend of Sherry’s sister and is also my children’s piano teacher. Turns out I’m living not far from where she grew up and she’s living in the downtown of the capital city, but still only a few minutes drive from her patch of Middle Cove heaven.

I’ve spent the last few weeks listening to her past recordings; 2005’s Bottom of a Heart and 2007’s Wonderful Cures. I’m impressed and delighted by the depth of her songwriting and the range of her voice. To top it all off, her list of musical collaborators reads something like a Who’s Who of Newfoundland music. Duane Andrews, Mark Bragg, Patrick Moran, Chris Andrews, Chris Picco, and many, many more. This gal moves in lyrical circles!

And so it begins…

MOCM: “Do you have a process or method when beginning a song?”
SR: She looks at me with a grin “Hmmm…I suppose lyric first then worked out on guitar, sometimes piano. There’s no real method. Nothing is forced.”

MOCM: “You’ve got a new album coming in the fall. It’s been a while”.
SR: “Yeah, the album is pretty much done. We’re working on the cover artwork and the final details now…It will probably be five new songs and five evolved old ones…maybe” she grins again.

MOCM: “What sort of things do you like to do most for fun?”
SR:"I like to do not so much fun stuff, but more meaningful stuff…” she frowns “Sad songs, hurting love songs, Irish ballads…jamming is fun.”

MOCM: “So what’s next?”
SR: “Well, the new album…once that’s released, maybe book a Canadian Tour, but not a big thing. It’s been a while since I’ve done any touring…aside from a trip to Ireland last year, I haven’t done any.”

MOCM: “ Why the long break?”
SR: “People think I disappeared when actually what happened was I had a shoulder injury! I was a long time getting over that. The condition is aggravated by the weight of a guitar on my shoulder. Lately I’ve been playing less and less guitar and focusing on vocals and piano. I actually started on piano…it’s been years”

MOCM: “You spent some time in the South?”
SR: “Yes, I worked as an Occupational Therapist in Mississippi back in ’97. I loved the music in the south, and the food!” She closes her eyes as she seems to remember the tastes “The food was incredible!”

MOCM: “You have a thing for French Pastries you say?”
SR: (laughing)” Actually my husband is a pastry chef as well as a musician. You’ve heard of Joe Belly? (I have) He’s also the pastry chef at a place called ‘Rocket’ on Water Street. You should try some” (I agree that perhaps I should).

MOCM: “So who are you working with these days? Your collaborators so to speak?”
SR:”Willie Youngtree and I have similar tastes…and the guys I’m playing with I’m calling ‘the Enablers’ but I don’t know if that will stick”

MOCM: “What are some of your favourite pass times?”
SR: “ Yoga, I love yoga…and farming. My husband and I have a little bit of farmland in Middle Cove that we like to spend time at. I like to play small venues as well. I like the closeness and the ability to chat with the audience. St. John’s is a great place to play…it’s got lots of small intimate settings.”

MOCM: “You like the hometown crowd do you?”
SR: “ Yeah, there’s something about playing here, and in Newfoundland in general. We have a laid back way of things, and all styles and genres of music are accepted here, but we put our own touch on them.”

MOCM: “If you could sing with anyone, who would you like it to be?”
SR: “ Emmy Lou Harris. She’s got the best harmonies in the world! I love her harmonies.”

MOCM: “Who are your songwriters of note?”
SR: “Ron Hynes for sure, Lucinda Williams, Dolly Parton, Gillian Welch…there are so many great writers…”

We finish up our beers making small talk and looking out the window onto the street. The weather appears to be clearing somewhat and so the outlook for the evening is bright. So is the outlook for Sherry’s new album as well, I’m thinking. I thank her for her time, pay the tab (except for the first one she had before she sat down…I’ll owe her!) and hope to see her again sometime.

As it turns out, I get my chance a couple of months later when Sherry contacts me to say she’s the featured performer at an Open Mic night in a little pub called The Ship in St. John’s. She and two of her musical friends, Bryan Power and Brad Power, talented guitar players both are playing a couple of sets of the new songs and would I be interested in dropping down to hear them? Of course! Over the run of the evening I hear the entire collection and am looking forward to the album release, which Sherry announces will be December 10th at the LSPU Hall. All that’s left now is the final artwork and “Sister of Mine” will be on the shelves.

Sherry has provided me with a burned copy of the album fresh off her hard drive. Great stuff! I have several listens and feel a mixture that evokes the feeling of styles as diverse as Leonard Cohen, Jimmy Buffett, Lucinda Williams, Hank Williams and many more…all comfortably nestled in the style that’s unmistakably Sherry Ryan, sounding stronger and more confident than ever before. Titles like ‘Blue Ridge Mountains’, ‘Back Step Blues’, ‘Burn My Journal’, ‘John Dawe’s Gone to Sea’ and not to be forgotten, the Deep South inspired title track ‘Sister of Mine’.

So here I sit on a dark November night, remembering the warmth of summer and the cooler evenings of the fall…thinking that this next album just might make a good Christmas gift for someone, perhaps even myself! That is if I can get an autographed copy!