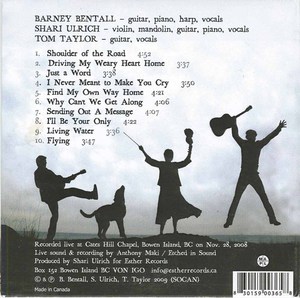 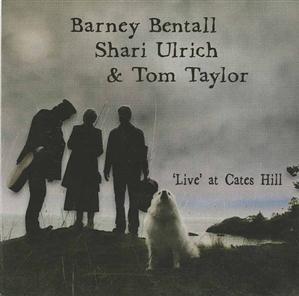 During the 1990s, Barney Bentall's music was a staple on popular radio stations nationwide. With two platinum and four gold albums, a Juno Award and a string of top ten singles to his credit, Barney Bentall and his band The Legendary Hearts were renowned for their standing-room-only live shows. By 1997, seeking a change in perspective, he bought a cattle ranch and walked away. He continued performing, but felt the pull back to a simpler, stripped-down acoustic approach to songwriting. 2007 brought the solo release of Gift Horse, followed by The Inside Passage in 2008. Barney also formed The Grand Cariboo Opry with a variety of musicians as a way to help raise funds for needy residents in the Downtown Eastside of Vancouver. He is known for his intimate, warm and entertaining performances and storytelling.

In all, Shari Ulrich has released 17 albums – as a solo artist and as part of various groups – which have garnered her two Juno Awards, several award nominations and an induction into the British Columbia Entertainment Hall of Fame. She is a gifted multi-instrumentalist (piano, guitar, violin, mandolin and dulcimer) and songwriter, who crosses from folk to pop and back again. Her keen sense of humour and seasoned comfort on stage translate into a very special experience for her audiences.

Tom Taylor was first introduced to music when his grade ten English teacher played “Mr. Tamborine Man” on his big twelve string acoustic guitar. From that day on, Tom was hooked on acoustic folk/roots music. Soon after came Dylan, then Neil Young, then John Prine and many others who inspired Tom to pick up the acoustic guitar and begin his own songwriting journey. He formed a band “She Stole My Beer”, released two albums and toured extensively. Tom currently pursues songwriting as a solo artist and has released two albums, King of July and Running Late.

In 2009, Barney, Shari and Tom came together to record Live on Cates Hill. As one listener put it: “Sometimes you buy a CD and it takes you a while to get into it or you bought it for that one song and that's all you like. Not so with Live at Cates Hill. There's a folky bluegrass down home country goodness to it that just makes you feel great! Great songs by all. I listened to it for the first time on my way to work this morning. Some things just put a smile on your face. I'm wearing one now.”
-Village Now