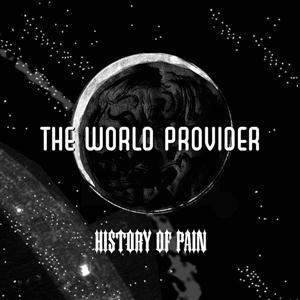 The fourth World Provider album, History of Pain, was produced by Murray Lightburn of The Dears. Inspired by Lightburn, who saw them as a closet garage-rock band, The WP brain trust decided to add some guitars to their arsenal of vintage synths and unleash The WP’s latent rock’n’roll side, transforming The WP’s trademark toy-keyboard sound into a shot at anthemic pop heaven. Recorded in Lightburn’s home studio over the course of a year, History of Pain features WP mastermind Malcolm Fraser, as well as longtime WP cohorts Stacey DeWolfe on drums and Steve Raegele on lead guitar.

A newly revamped lineup with Malcolm, Stacey, Steve and new keyboardist Gordon Allen will hit the road in celebration of the new album in September 2011. In anticipation of the new album, the Summer of Pain series, a compilation of History of Pain remixes by notable artists from Montreal and beyond, along with deep cuts from the WP vaults, is being released over the summer as free downloads on the WP website here: http://theworldprovider.net/site/

For over a decade, The World Provider has been fine-tuning the irresistible combination of catchy tunes, strange sonics, and over-the-top theatrical performance. Taking the forms of solo, duo and full-band performance, and featuring collaborators over the years ranging from Feist and Peaches to members of The Dears and The Besnard Lakes, what remains unchanged is the WP’s commitment to musical entertainment.

The superheroic alter ego of mild-mannered writer/filmmaker Malcolm Fraser, The World Provider, got started in Toronto in 1999. First seen onstage as a touring keyboardist for Feist and dancer/backup vocalist for Peaches, the WP’s energy could not be contained as a sideman, and Fraser broke out into the spotlight, self-releasing the debut The Elements of Style in 2000. After relocating to Montreal, The World Provider released Enabler in 2004 on Ta-Da Records followed by the self-released Hard Feelings (2008), which included the Pitchfork and CBC Radio 3 favourite Valentine (featuring Feist). A duo version of the WP featuring Malcolm and Stacey toured Canada, the US and Europe in 2008-2009, including opening slots for Peaches, Gonzales, Jamie Lidell, Stars and The Dears.