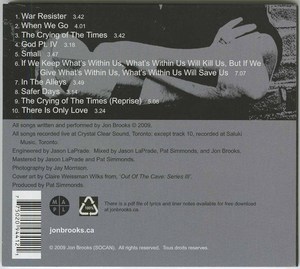 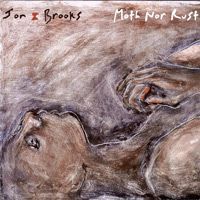 Jon Brooks' latest CD features an ominous title - "Moth Nor Rust" - a phrase taken straight from new testament scripture - and equally ominous artwork entitled "Out of the Cave: Series III". These touchstones point to a serious disc, indeed. But like so many a biblical phrase, there are hints of horror and damage but also hope and joy. Brooks elegantly rails against the injustices of our times, but this is no easy cynical blast of anger. Brooks' music features pretty melodies and soft picking guitar which are set against a gruff gravelly voice and syncopating guitar beats. Black and white, good and evil, love and hate, yin and yang - it's all there. Brooks is clearly a fan of contrast, and this disc does a fantastic job of capturing these elements.

"War Resister" sets the stage for this dynamic tension: the first person narrative comes from a soldier, proud and mighty: "...Yeah we don't know why we do what we do, it's just breathe, trigger, squeeze. And I was trained to kill. Kill we will. In the 82nd Airborne we exceed the standard of soldiering..." But back at home there is a realization and an aching: "I got a secret that I can't tell. My conscience is making me a criminal. And my hands they shake with the paradol. And I asked Allah and God's son, 'What's freedom worth when it's bought with a gun...'"

There's no catharsis there: the song ends soon with a lament for the soldier's hometown - a symbol of innocence lost. Brooks knows that life is not often resolved with easy changes. But all is not sadness on the record: "When We Go" picks things up with a brighter pace and a hopeful lyric. Although the song stresses that "If it's not love, we can't take it when we go", the song reminds us of what is truly valuable in life: forget about all those material things and events, and focus on what makes us real humans.

"The Crying of the Times" is here in two versions: the first, shorter track is another call for recognition of what is important in these times of pain. Brooks uses the title phrase as a subtle criticism of mass disinterest in real change: we hear about so many problems - as close as the "neighbour's walls" - but we can't hear the broader crying of the times. Brooks' simple guitar strumming provides a mellow backdrop: like on most tracks here, the lyrics and Brooks' voice are the focus. The longer, slower, bluesier reprise of the track introduces a new element: while the first version is an exhortation - a rhetorical call to action - the second is a desperate statement of sad fact.

I can picture Brooks performing in a coffee house in 1964 just as easily as I could see him in a local club today. "God Pt. IV" is an old-timey folk protest song - complete with slow pickin', a foot stompin' chorus, and an uplifting refrain with gentle harmonica. This is obviously a play on U2's "God Pt.II", but this is no hero worship. Brooks takes on what he sees as the hypocrisy of wealthy rock stars preaching about peace, love and understanding:

On his website, Brooks describes the role of the folk singer - a classic definition which stands in stark contrast to many mega-performers:

"I believe the opposing blend of rational word and emotional melody may afford us the rare chance to see others as we might see ourselves. I want my songs to be three and half-minute pills which, if digested, induce upon the listener empathy toward others. ....I aim to comfort the disturbed and disturb the comfortable. The songwriter should attempt to improve the world by way of showing it to us as it is the mandate of all art to improve the world by inspiring empathy…ultimately, the folk singer is trying to politicize love – to lobby for compassion to be our principle representative on Parliament Hill.”

All these tracks illustrate this perfectly. And Brooks' lyrics aren't just directed at the political or social justice spheres: "Small" details a desire to be an astronaut - but not to travel space or claim some privileged view only few have. No, being an astronaut would allow us to see how small we really are. But it's more than that: Brooks brings the viewpoint to an intimate level: an image of a son speaking to his father, the son who is the reason there has been no divorce, but who cannot understand how a couch was also a bed. A compelling, sad image, Brooks has an amazing ability to paint these sad pictures with grace and with humility.

"If We Keep What’s Within Us, What’s Within Us Will Kill Us, But If We Give What's Within us, What's Within Us Will Save Us" is a cumbersome title for a track that focuses on working people. But this is not a traditional homage to workers: Brooks let's us know that we all work in what we do, whatever we do: thinkers and feelers who have so many chances to do and change and improve, but fail to take advantage of what we could do:

We’re administrators in the pulpit and we’re decisively agnostic in the pews. We’re the journalists working at The Second Cup. And we’re the statisticians reading us the news. We are the Marxists when there’s nothing on TV. We live bourgeois - our debt is proletariat. We bought a used copy of Solzhenitsyn once -we haven’t had a chance to pick it up yet.

The balance of these tracks continue the folky vibe, with themes of redemption and love, found in the simplest and sometimes most unusual of places. "In the Alleys" is a sad story with a pretty melody - told with the eyes of a John Prine, a Steve Earle or his mentor Townes Van Zandt: short, descriptive images of desperation, always with a bright lining of grace: "in the alleys and in love there is the truth". This track is followed by "Safer Days", a connected song for sure, this time longing for an innocence gone again.

"There Is Only Love" is a great closer, and the end of a journey starting with the soldier's song at the beginning. It would be easy to be saccharine and overbearing with songs about the ties that bind, the love that lies behind everything. But Brooks never succumbs: these are genuine expressions, well worth listening to:

Brooks is working on his next full length, The Tired Soil, which will offer a view of the Canadian immigrant experience. If we're lucky he'll sample some tracks this fall.