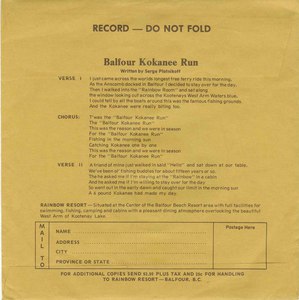 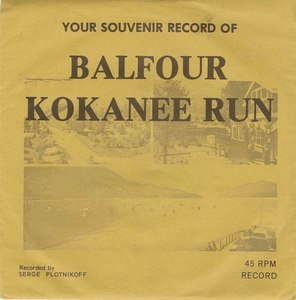 Nestled along the shores of Kootenay Lake, Balfour is a small but vibrant community, offering multitudes of opportunity for the avid hiker, biker, golfer, boater and fisherman.

If you take a short walk up past the entrance to the Kokanee Glacier road, on the right hand side of the road, you'll find the remnants of the Busk Estate. There's nothing much left other than a rock wall, the old swimming pool and a magnificent 100 year old copper beech tree. Charles Busk built his mansion there, christened "God's Garden", and for many years held numerous parties and led an indulgent and extravagant lifestyle with his many friends.

Charles Busk was a wealthy Englishmen, born in 1851. He came to Canada in the summer of 1888, and worked in and around Nelson and Kootenay Lake. In 1889, Charles claimed 200 acres along the West Arm for a town site and named it Balfour after Lord Balfour in England. The streets were surveyed by him and named for his family members and friends. Originally, he believed this town would be the fruit growing center of the Kootenays, but the sandy soil and lack of water forced Busk to give up his dreams of endless orchards. He sold the land, but not before building St. Michael's Church, bringing the church bell all the way from England.

Busk not only created our little town, he helped start the first Boy Scout troop in Nelson, and personally sponsored many underprivileged boys, helping them receive educations. He had many friends, was a devout Anglican, and seemed to enjoy life to its fullest. He was often called "Captain Busk", as he enjoyed boating in Kootenay Lake. He abandoned his home after a dispute about a road that would run right through his property. It was used by miners at the time, and it greatly offended Charles when the miners would go by on their way to and from work, and whistle and call out to his female guests as they lounged by the pool. This road is now the Kokanee Glacier road. The house was used by his family for many years, until it was sold for $50,000 to the Government of B.C. Ultimately, it became condemned and was burned down by the Parks Board in the 1970's.

Charles Busk passed away in the Nelson Hospital in 1934, leaving most of his money to the Church, and a unique legacy for all of us who live in Balfour.