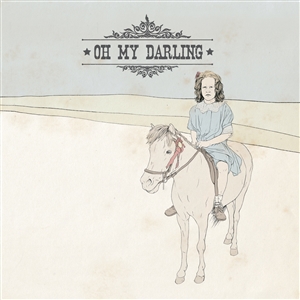 It is the combination of four strong personalities that makes Oh My Darling one-of-a-kind. With four creative minds behind the writing, arranging and performing, the original music of Oh My Darling is unique, informed, and entertaining. Formed during a particularly frosty Manitoba winter, in 2008, Allison, inspired by groups like Uncle Earl, asked her friends Vanessa and MJ to put together an all female old time band. Looking for a fourth who could play fiddle, Allison’s step-dad called a bluegrass band-mate from the 1970s, which informed him that her daughter played fiddle. Rosalyn Dennett was brought into the mix, and the music making began. They soon realized that Vanessa had a great talent for song writing, and MJ had a tendency towards unconventional bass lines and harmony, so the idea of a traditional band began to fade into the background in favor of a more contemporary sounding repertoire.

Still keeping some old time tunes up their sleeve, they started building an arsenal of original material, and before they could reload, they got their first gig at the Festival du Voyageur in Winnipeg. Scrambling to come up with a name for their first gig, they took on the name Fill'd'Riel (daughters of Riel), which celebrated the bands Métis heritage, while also acknowledging the range of influences in their music, including Celtic, French, Métis, and American. After the festival was over, the girls went back to the drawing board and the name Oh My Darling emerged from the rubble of crumpled scraps of paper, baby name books, animal encyclopedias, and tune lists.

Winnipeg's rollicking roots scene is making room for foot-stomping new-comers "Oh My Darling". A powerhouse of superb musicianship, these fiery performers draw on a genre-fusing repertoire of old-time, country, folk, bluegrass, funk and blues. With the debut of their self-titled EP, Oh My Darling cordially introduces themselves and gives a taste of original string band artistry that leaves us wanting more. OMD features fast fingered Allison de Groot on clawhammer banjo, saucy Rosalyn Dennett on fiddle, Marie-Josee Dandeneau with a grooving upright bass, and feisty Vanessa Kuzina on lead vocals, guitar and mandolin. Consistently sold out performances throughout Winnipeg and Western Canada lend credence to the idea that these gals are worthy of our attention. The lively lasses of Oh My Darling have recently wowed audiences young and old at soft-seat theatres and festival and roots club stages such as the infamous Times Change(d) High and Lonesome Club, The Winnipeg Folk Festival Folk Exchange and Festival du Voyageur.

Their self-titled debut EP was released in 2009, and honored with a Western Canadian Music Award for Best Roots Album.