With a sweet name and even sweeter sound, Oh My Darling conjures up the right mix of emotion and elation with their unique brand of country. Their prairie roots mixed with bluegrass, Appalachian old time, southern twang, and Franco-folk, makes their style a melting pot of musical languages. Infused with dynamic vocals, brilliant claw-hammer banjo, inspired fiddling, and grooving bass, their music will get your hips swinging, toes tapping, and put your heart right into their hands.

Each time Oh My Darling takes the stage, they prove time and again why they’re captivating audiences and attracting an abundance of fans, because boy, can these girls can play! Individually, they are known as some of the hottest players on the Canadian roots scene, but there is strength in numbers, and combined, the foursome is strong as steel.

Allison (banjo/vocals) is one of Canada’s best claw hammer banjo players. she is also a great singer, and a great songwriter in her own rite. Allison brings a calm and steadiness to the band with her personality, as well as her rock solid banjo lines. She graduated with a Fine Arts degree from the University of Manitoba, which gives her the authority to oversee a lot of the visual artwork done with the band. Allison started studying banjo when she was just out of high school. Once she discovered the claw-hammer style, she began taking lessons with Daniel Koulack, Winnipeg resident and internationally acclaimed banjoist. Just before starting the band, Allison began traveling down to West Virginia, and other areas of the United States, to learn more about Appalachian music and culture, a habit she still keeps up regularly.

MJ (bass/vocals)- self-taught musician- was already a veteran of the music scene, before forming the band Oh My Darling. Her tours with Nine Mile, Xavier Rudd, the Wyrd Sisters, Corinne West, Tribe of One, Pete Murray, Eliana Cuevos Band and Doug Cox (to name a few!) have taken her, and her unique style of bass playing, all over the globe. This experience was vital to Oh My Darling's momentum, as MJ assumed the role of booking agent for the band, and after many successful tours across Canada, has now partnered up with Paquin Talent & Booking Agency, keeping Oh My Darling busy the year through. Her custom-made upright bass is a commanding presence, despite it's smaller size, due to the energy and vitality that MJ expresses in her live performances. Audiences and industry professionals alike, frequently pay compliment to her talent as a musician as well as her engaging show of personality on-stage.

Rosalyn (fiddle/vocals) is a life long scholar of music. She spent a year in Galway, honing her skills as an Irish fiddler, has made multiple trips to northern Manitoba to teach and experience fiddle in Métis culture, earned a Bachelor of Music from the University of Manitoba, and has recently been making pilgrimages to the United States to immerse herself in Old Time Appalachian singing and fiddling. Rosalyn's passion for learning is but a reflection of her passion for her craft. She puts a fierce enthusiasm into her instrumental and song writing, arranging, and performance, with an informed edge. She infuses Oh My Darling with subtle humour and witticisms, through her role as the band's copywriter, and always has a joke to share on and off stage.

Vanessa (guitar/vocals) began to discover her voice in various singing groups in high school. Soon after, she began writing on her own, and eventually created her solo album of all original songs, Peony (2007). She's been labeled the "cowboy poet" of the group, with her lyrics that tell stories about life on the prairies, and probe at emotions that run deep through in human experience. Her sensitivity and empathy are valuable to the band, as she is most often the spokesperson for the group, and is lauded for her ability to handle even the stickiest of situations with grace and poise. As her musical talents continue to develop, she is diversifying her talents as a songwriter through leading songwriting workshops and camps, and collaborating with major country artists such as Tom Wilson (Junk house, Blackie & the Rodeo Kings), Murray Pulver (Doc Walker), and Sam Baker (singer-songwriter). 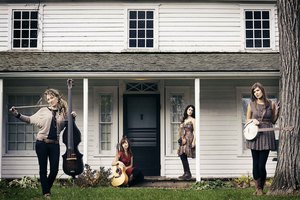 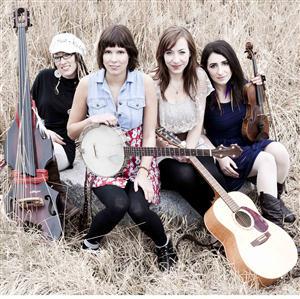