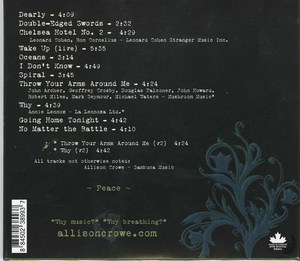 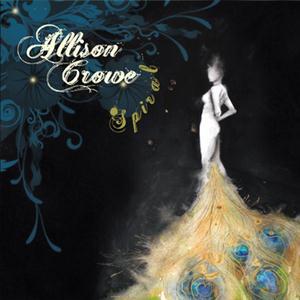 Spiral ♫ contains eight of Allison Crowe’s original songs, ranging from the tender and playful country/roots of “Dearly”, to the upbeat pop of “Double-Edged Swords”, ’cross the loving “Oceans”, and darker terrain of “I Don’t Know” and the hard rocking title track. Raw, natural, emotion is embraced passionately with elegiac beauty and melody in these, and such joy-filled tunes as “Going Home Tonight” and “No Matter the Battle”. With the live track, “Wake Up”, Crowe, again, renders the personal universal, and the global, human.

Uniquely known not just as one of the most exciting songwriters of a new generation, Crowe is also one of our finest interpreters of popular song. Spiral’s mix of light and shadow includes a trio of fresh covers – revisiting music of Annie Lennox (“Why”), Leonard Cohen (“Chelsea Hotel No. 2”), and Hunters and Collectors’ Antipodean anthem, “Throw Your Arms Around Me”.

♫ Allison Crowe’s music is that feast where, says the poet Rimbaud, “all hearts open and all wines flow.”

Over a decade of reviews, the word most often used to describe the voice of Allison Crowe is “gorgeous”. The word that testifies more than any other to her musical performance is “amazing”. This month, the much-loved and acclaimed singer-songwriter releases “Spiral”, her seventh album/CD. It is both of these things. And plenty more.

U.S.-based entertainment blog ‘Muruch’ earlier this year named it as an album most highly anticipated, and, now, UK music blog ‘We Write Lists’ includes "Spiral" as one of "The Twelve Most Exciting Albums of 2010", remarking: "Crowe's speciality is startlingly beautiful piano-based songs that sort of make you wonder why you bother with anything else."

(Joining Crowe on the list are new recordings from: Fleet Foxes, Fyfe Dangerfield, Girls Aloud, Goldfrapp, Gorillaz, Joanna Newsom, Marina and the Diamonds, Massive Attack, MGMT, Music Go Music and She and Him.)

For Allison Crowe, a peerless live performer, and a singer-songwriter of the thrilling calibre known in the 1960s, Spiral is the seventh release from her label, Rubenesque Records, in as many years. Musical production wrapped on Valentine's Day.