Compilation - Live! From The Grooveyard 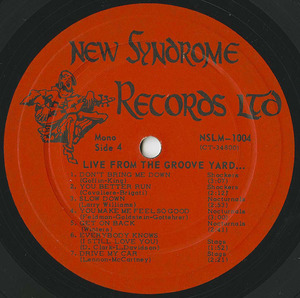 VA Live From The Grooveyard LABEL 04 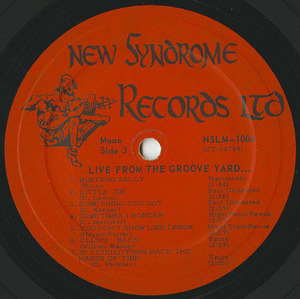 VA Live From The Grooveyard LABEL 03 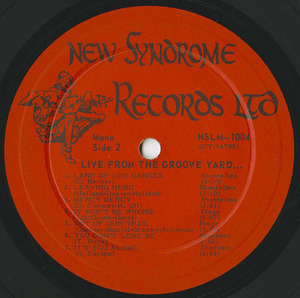 VA Live From The Grooveyard LABEL 02 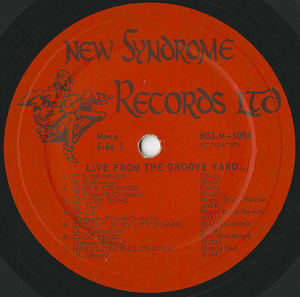 VA Live From The Grooveyard LABEL 01 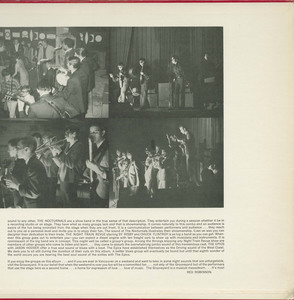 VA Live From The Grooveyard GATEFOLD 02 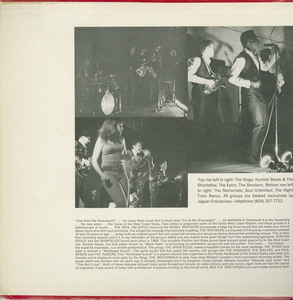 VA Live From The Grooveyard GATEFOLD 01 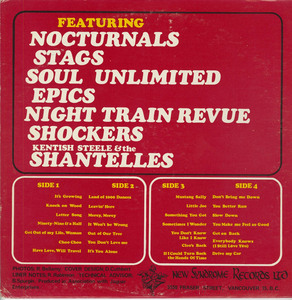 VA Live From The Grooveyard BACK 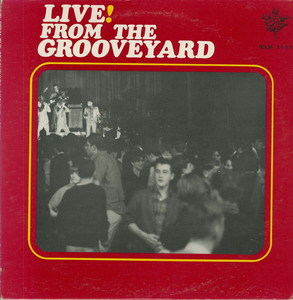 Live! From The Grooveyard

It's hard to believe that New Westminster could be the heart of the R&B Scene, but there it was, the mid 60's, and IKE AND TINA TURNER were on the bill! The former Hollywood Bowl, under new ownership of Les Vogt and the management of Douglas Miller, became the short lived Grooveyard, and took its rightful place in local music history. MARVIN GAYE, ETTA JAMES, LITTLE JUNIOR PARKER, THE SPINNERS, and BO DIDDLEY performed there, as well as hot Northwest groups THE KINGSMEN, PAUL REVERE AND THE RAIDERS, DON AND THE GOODTIMES, and even THE SONICS. Most importantly, The Grooveyard gave some of Vancouver's hottest acts a stage and, on some very special evenings, you could see up to ten live bands and dance 'til you dropped. It just didn't get any better. The original album was the brainchild of Les Vogt, band manager, concert promoter, rockabilly performer, and owner of the Grooveyard. He thought the album would generate more publicity for the club and the bands in his management stable. He took his idea to musician and song writer Tom Northcott and local entrepreneur Jack Herschorn at their offices, where they operated New Syndrome Records.

All the songs on the album were recorded and engineered by Robin Spurgin at his studio. The songs were not really recorded live in the club, but were actually played live in the studio with no added overdubs. Oddly, the crowd noise that was added to the background was recorded at the Arctic Club (a Vancouver Jazz venue) and not at the Grooveyard.

Recorded in 1966 and released in 1967, the originals pressing of the double album was only 1000 copies (making it one of the most sought after albums in Vancouver record collector circles). Doug Cuthbert, the original drummer for the Night Train Revue, did the original cover design. (taken from the liner notes)

Despite its name, the music on the double album was actually recorded at a West Broadway studio and the “live” sound was a looped recording from a West 4th hippie club called Afterthought. A 1981 Sun article points out that the musical rivalry between soul/R&B and the Stones/Beatles rock sound comes across on this record.

Live! From the GrooveYard became a rare collectors item but was released on CD by Neptoon Records in 2004.

Neptoon Records was responsible for this re-issue and as one might expect it consists mainly of Soul and R&B covers. Not a bad album, all bands are competent and the music has a special Northwest sound. The Stags for instance did a fine cover of The Wailers' "Out Of Our Tree" as well as an innocent version of The Byrds' "It Won't Be Wrong", The Shockers could easily find place on any "Northwest Battle Of The Bands" volume and The Shantelles' cover of "Have Love Will Travel" leans more towards to The Sonics than to the Richard Berry original (but in a smooth way). Live! From The Grooveyard is surely an artifact but also a hipshaker and quite good listen through.
-https://allmusic-wingsofdream.blogspot.com/2015/03/va-live-from-grooveyard-1967.html