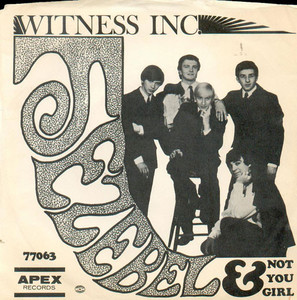 Musically, you have to hear this sucker to believe it! Whoa! "Jezebel" starts of like Seabiscuit busting out of the gates, then eases back... shows a little restraint for a moment and then STRUTS with the same gusto and swagger as a young Jagger, Bowie or even a lean mean Marlon Brando for that matter. SOLID GOLD EAR CANDY! Why wasn't this a hit across the globe???? "Not You Girl" is the musical equivalent of a illegitimate love child if The Animals "House Of The Rising Sun" and The Zombies "Time Of The Season" had ever spent some time together in the back seat of a '63 Lincoln! Damn! The keyboards SCREAM, this thing is AWESOME.

Witness Inc. came out of Saskatoon in the central Canadian province of Saskatchewan and immediately became a touring sensation in the western provinces. They released a series of 45s which became increasingly pop after the second, finally catching on in Ontario after several years and many personnel changes. The original band consisted of Kenny Shields vocals, Ed Clynton guitar, Allen Ayers bass, Les Bateman organ and piano, and Dave Tupper on drums. Their first 45, I'll Forget Her, is a fine pop song. The A-side of their second record, Jezebel, is a cover of the old Frankie Laine standard. Well done, as good as the Teddy Boys version, it was probably their biggest hit, reaching #1 on CKXL in Calgary in February, 1968. Garage fans generally prefer the flip side, Not You Girl, an original by Clynton and Bateman, which speeds by in a hasty 1:46 with a great scream from Shields and an nifty organ solo by Bateman.