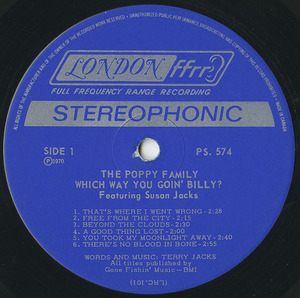 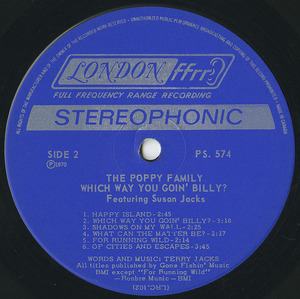 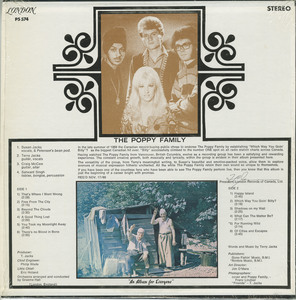 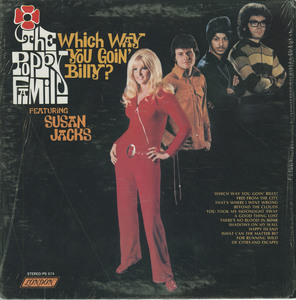 While in recent years dozens of would-be hipsters have written about the dark undercurrents to be found in the music of the Carpenters, anyone looking for a truly great bummed-out soft rock experience needs to dig up the long out of print debut LP from Vancouver's Poppy Family. While producer, arranger, songwriter, and general straw boss Terry Jacks later found fame for his hit adaptation of Jacques Brel's "Seasons in the Sun," his greatest work was with his then-wife Susan Jacks and their group, the Poppy Family. Blending moody soft pop with light psychedelia, the group hit a rich vein of gorgeous melancholy that made sadness sound positively sensual (the album's token "upbeat" tune, "Happy Island," is significantly also one of the set's weakest moments). The album's two international hit singles, "Which Way You Goin' Billy?" and "That's Where I Went Wrong," are both tales of lovers on the run that sound as desperate as Del Shannon and as lonesome as Brian Wilson's worst nightmare, and such lost classics as "You Took My Moonlight Away" and "Beyond the Clouds" are every bit as strong, boasting clear but emotive vocals from Susan Jacks, brilliant if oddball Indian percussion from Satwan Singh, and melodramatic string arrangements from Graeme Hall. And the two side-closing "freakouts," "There's No Blood in Bone" and "Of Cities and Escapes," manage to be cheesy and powerfully effective at the same time. If the '70s were supposed to be about having a nice day, Which Way You Goin' Billy? shows the Poppy Family were one band waiting for a cloud to blot out all that annoying sunshine; at once kitschy and marvelously sincere, it's a great record worthy of rediscovery.
-Mark Deming, AllMusic